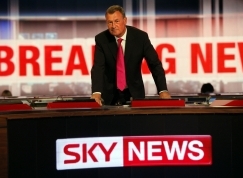 Jeremy anchors Sky´s flagship “Live at 5” programme and is one of the world´s most renowned journalists with an intense career in journalism spanning 40 years.  As a foreign correspondent Jeremy has covered wars, genocides and uprisings, he has reported on elections from Margaret Thatcher to Obama, floods, famines, earthquakes and the Twin Towers and conducted private interviews with the likes of Nelson Mandela.   As Sports Correspondent he has covered four Olympic Games, two football World Cups and three Rugby World cups amongst other great sporting events.  His remarkable career has been recognized with various awards including; 2006 RTS Presenter of the Year award, an Emmy from the US Academy of TV Arts & Sciences, three gold medals for Best News Reporter from the New York TV Festival amongst a host of other accolades.

In essence, this short introduction does not do justice to a man who has risked life and limb to deliver news stories live whilst somehow managing to maintain his calm composure throughout.  A man not easily rattled, except perhaps on the golf course...

1. How long have you been with Sky News?

I joined Sky News 16 years ago as Africa Correspondent based in Johannesburg. I’d been posted out there by ITN to report for ‘News at Ten’, but was persuaded to jump ship by the newly emerging Sky and I was attracted by the idea of working for Britain’s first 24 hour news channel. Most of my colleagues in terrestrial TV news thought I was crazy, they were convinced Sky News would never survive. How wrong they were!

2. Did you always want to be a journalist?

I was always curious, nosey, adventurous, wanting facts and I could write decently – so journalism was an obvious career move. I started on the Cambridge Evening News as a teenager and completed a four year apprenticeship instead of going to university. Then I joined the BBC working my way through local radio, regional TV news in Yorkshire, before becoming a network news correspondent and then moving on to ITN.

3. What is your most memorable / frightening / surprising moment reporting?

My years in Africa were my most memorable. I was lucky enough to report on the years that saw an end to apartheid, from Mandela’s liberation from jail through to him becoming President. And I stayed on to see South Africa win the Rugby World Cup. It’s also the place I came closer to dying than just about anywhere else. Twice I was caught in the middle of massacres – in Ciskei and Katlehong – all part of reporting the ongoing political warfare that raged in those turbulent times. I also covered some pretty wild and dangerous stories, like the Genocide in Rwanda and civil wars in Somalia, Angola, Mozambique, Sudan and Sierra Leone. So the Continent of Africa has some very special memories for me – historic, dramatic, emotional, surprising and frightening.

4. Who is the most interesting person you’ve interviewed and the person that you would most like to interview and why?

I was lucky enough to interview Nelson Mandela a number of times, which was an enormous privilege as I see him as by far the most impressive man I’ve ever met.  However I would like to interview Barack Obama, I covered much of his election campaign. I was ‘live’ on Sky News in the US when he was elected and at his Inauguration in Washington last January, but I never got a chance to interview in depth.  Now would be a very interesting time to discover his views – one year into office.

5.You have travelled round the globe, where is the most fascinating place that you have been to and why did it have such an impact on you?

Having reported from more than 100 countries, it’s tough deciding the most fascinating. But I do have a bit of a thing about volcanoes. I’ve stood reporting on the smoking slopes of Mount Etna in Sicily as it erupted. I’ve played golf on a brilliant course on the slopes of a dormant volcano on the Caribbean island of Nevis (the locals promised me “it was deceased”). I love the volcanoes of Maui in Hawaii where I ended up after reporting two Millenniums in one day – the first from New Zealand, the second from Waikiki Beach, Honolulu. I was presenting live shows from the Caribbean island of Montserrat as its Soufriere Hills volcano exploded into life in 1997. And I was there when we got news of Princess Diana’s death. I’ve also had a small role as a reporter in the film ‘Volcano’, starring Tommy Lee Jones.

I even anchored Sky’s Tsunami coverage from Thailand – after all that was another seismic eruption, albeit under the sea.

6. So having travelled to some of the world’s most exotic (and not so exotic!) destinations, why Marbella?

Well, so far Marbella seems to have steered clear of civil wars, volcanoes, earthquakes, floods, famine, pestilence and coups d’état. And that all means I can have a nice, quiet break away from the newsroom without too much fear of interruption. And the weather’s usually great, the food’s terrific, there are some damn fine golf courses and its only 2 hours 20 from London.

7. What have been your most impacting / life changing moment?

No single life-changing moment I can think of. But becoming a foreign correspondent back in the early 1980s was the big test. Once I found I could handle the big international stories on the world stage, I never looked back. I felt I could report on just about any story from anywhere. In those early years I was lucky enough to cover an England Ashes cricket tour to Australia, the LA Olympics, the Union Carbide disaster at Bhopal in India, the election of Benazir Bhutto in Pakistan, the pro-democracy uprising in South Korea and the student protests in Beijing’s Tiananmen Square.

8. I know that you have a strong affiliation with South Africa; will you be covering the 2010 World Cup?

I fell in love with South Africa when I was based there from 1991-95 and I still go back every year, mainly on holiday these days. And I’ll be going out to present Sky News’ World Cup coverage, which I’m looking forward to immensely - I just hope the England squad finally does us proud.

9. Which are your favourite restaurants in Marbella and London?

In London, my wife and I are regulars at J.Sheekey, La Trompette, the Wolseley, the Glasshouse in Kew and we recently discovered a great tapas bar in Borough Market called Brindisa. And talking of tapas, as we live just west of Marbella, our favourite haunt is Asador at Guadalmina. As for Sunday lunch, there’s nowhere better than seeing Mike and Athene at The Forge just below Casares. And for a touch of classy home comfort, we always like to pop in to see the very welcoming Costas at Peggotty’s in El Pilar for a gigantic piece of cod or haddock.

10. I know that you are a golf aficionado; would you want to be Tiger Woods for his golfing prowess or for being such a “hit” with the ladies?

He’s certainly put a new twist on the old Esso commercial ‘Put a Tiger in Your Tank.’ !  I think I’ll just stay out of reach of my wife’s 9 iron on this question.

11. Which is your favourite golf course?

Our home course is Los Arqueros, which is not only very attractive with great views, but mighty challenging as well. And it’s a club full of terrific members, who take the social side as seriously as their golf – thank goodness!

I was lucky enough to play Valderrama on my birthday last year, which was a real treat – testing and exquisite.

I like Monte Mayor for its stunning views and its unconventional challenge. While Santana is a classy course in a delightful setting.

12. Is golf a relaxing past time or a frustrating mission?

My friends used to ask if I was coming out to play “Boll***s”, as that’s all they seemed to hear as I hacked round in anguish. Now I’m playing a bit better and I’ve come to terms with the fact that I’ll never be great. So I’d say I’m a calmer golfer who no longer beats himself up.

13. Do you have an i-pod and if so what´s playing on it at the moment?

14. What book have you got on your bedside table?

Ian McGeechan’s Lion Man and Race of a Lifetime, the inside story of the 2008 US Presidential Election.

15. If you weren’t an anchorman extraordinaire, what would you choose to be?

Too late now, but I would have loved to have played professional sport as a youngster – either rugby union or cricket.  Otherwise I reckon I got pretty lucky job wise.

16. What is the most stupid thing you have ever done?

Nothing I’m prepared to admit to!

A chuleton de buey, with French fries and pimiento de padron washed down by a quality rioja reserva – or a great cabernet sauvignon.

18. If I was to give you a O/W plane ticket to anywhere, where would you go and what 3 things would you take with you?

Wherever it is it’s got to be hot. So I’d say Cape Town, but only in summer, together with my wife, my golf clubs and my John Platter 2010 wine guide.

Train. Eurostar to Paris for a weekend in spring is as good as it gets.

20. If you believed in re-incarnation, what would your next life look like?

I reckon this life’s been good enough that my luck might just run out next time round and I’d probably come back as a dung beetle, pushing shit uphill all my life!

Mary Laver Nee Warner 28-05-2013 17:59 My word what a journey you have travelled Jeremy since thoes Saturday night hops at Leeds university with Humphrey Littleton your friend George etc. Keep safe for your wife. It seems you have ducked enough bullets in your life.Good luck with the rest of it.
0

johnny 14-11-2011 04:12 frica is such a intense and diverse palce; It would ahve been intersting for thompson to expand ont eh practical aspects of his assignments, E.g sleeping conditions, toiletry faciltieis, and given the prsee attention and fascinaition with news anchors and their underwear styles and p[referecnes in recent tims, how often he got to change his undies especially in squlid boits of Africa. Soemthing to put inhis memoirs when he has nothing to dio in retiorement ; Wonder if JT is as coy as his namesack Paxman or as open as his rival Jon snow about whether he likes loose or overly tight styles; I saw a report in it when he was holding a famine vicitms hand in 1992 during his ITN days and theire was defintiley a vible boxer lining through his chinmo style trusers; Pity there no archive material on you tube; JT obviously doesn't miond roughing it; Does he miss thoses days or does he prefer geetting all dappered up in his suits and ties.
0