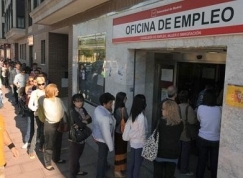 Unemployment figures in Spain rose by 61,083 in August, the first increase in four months according to a report released yesterday.

The 61,083 new unemployed marks a 1.56 per cent increase and  brings the total number of unemployed in Spain  to 3,969,661. The rise has been a dent in the positive four-month trend of falling unemployment that began in April after eight months of explosive unemployment growth.

Finance Minister Elena Salgado told Cadena Ser radio station that the trend is “normal” given that towards the end of summer unemployment figures increase due to temporary workers in the tourism industry seeing their contracts run out and no new jobs available.