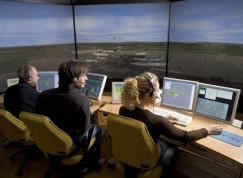 
A storm has followed the discovery that some controllers are earning more than €800,000 a year.

The revelation that Spain’s air traffic controllers can earn ten times more than the Prime Minister — and more than 50 times the average salary — has provoked outrage. The soaring salary scale was revealed as the Government announced plans to cut the cost of its loss-making airports, run by the state operator Aeropuertos Españoles y Navegación Aérea (AENA).

In contrast, José Luis Rodríguez Zapatero, the Prime Minister, is paid €91,982 a year and the average salary in Spain is €18,087, according to government figures.

Few passengers can complain that preventing aircraft collisions is not worthy of reward but the pay may come as something of a surprise to passengers whose holidays have been ruined by striking controllers.Earlier this month, passengers endured long delays, after two runways were closed at Madrid Barajas airport, because of staff shortages among its controllers.

Spanish air traffic controllers work 12-hour days made up of two four-hour shifts and two, two-hour rest periods.The controllers must have a degree, speak good English and pass a medical test every two years. After they are 40, they must undergo the test every year. A long list of medical complaints, including heart or digestive problems, will rule them out of the job.

The minimum entry age is 18 and the maximum working age is 55. Air controllers must pass a series of exams, including one on aeronautics and other psychological tests before being accepted for training. These tests aim to establish if they are able to withstand fatigue and high levels of stress. If they pass, they undergo 15 months training.

“I have taken the decision to take the bull by the horns and end the privileges of these controllers,” José Blanco, the Development Minister, told the Spanish parliament, after it emerged that AENA, which manages Spain’s 48 state-run airports, had recorded a loss last year of €300 million.

Mr Blanco aims to cut the costs of air traffic control by at least €12.6 million next year, which could mean a pay freeze or job cuts. Spain is now considering replacing air traffic controllers with a computer system in at least 12 small airports, which handle fewer than 50 flights a day.