The beat goes on in Barcelona barbers! 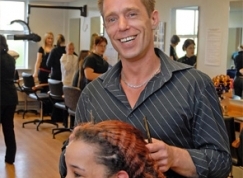 
Hairdressers have been ordered to pay royalties for playing the radio in their shops.

Hairdressers in Barcelona have declared war on the General Society of Authors of Spain (SGAE), which forces them to pay royalties as the SGAE say they are breaking copyright laws. In response the hairdressers have launched a campaign asking customers to come with their own music to avoid paying the tax.

Hundreds of hairdressers and beauty centres in the city of Barcelona, Sabadell (Barcelona) and Lleida and have hung a poster featuring the image of a girl with a vinyl record with the motto: "From now on when you come to the hairdressers ... do not forget to bring music from home!".

The vice president of the Catalan Federation of Beauty and Hairdressing, José María Figueres, explained that the posters began to be distributed among the 2,500 institutions that belong to this organisation shortly before  Christmas and already hundreds have joined the campaign.

"The campaign has been well received. Customers sympathise and love the idea of bringing in their own music," said Figueras, who emphasises that in addition to protesting about the fees, this measure avoids establishments paying the tax, since they do not play music on the radio.

SGAE has introduced a fee for having a radio to entertain customers and employees. It aims to protect the rights of authors of the songs that are heard which demands €6 per month for establishments of less than 50 square meters and €12 for those of 100 square meters. Figueras said that the situation is unbelievable. "Hairdressers do not put on live music, they are just trying to ensure their salons are comfortable, as if our customers were guests in our own homes".