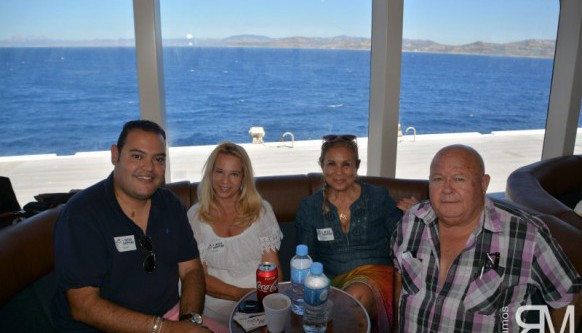 
On the occasion of the tenth anniversary of Ramos Comunicaciones and the presentation of the II International Awards, forty guests travel to the northern city of Morocco, Tangier, to attend the ceremony at the Hilton Hotel. Intershipping, the main Moroccan shipping company, is in charge of sponsoring the travelers' journey.

Last 1st of July 2017 began the trip organized by the marbellí producer, Ramos Comunicaciones, whose director is Felix Ramos and celebrating the ten years of its beginning. To this end, and on the occasion of the delivery of the awards that bear the name of the producer, forty people were invited, all related in some way to the participation or sponsorship of the work done for the program "Together with you: the world". This is a television program that offers news on the social life of Marbella, galas, events, concerts, parades and trips to other countries, where celebrities of Spanish social life often participate.

During the last year 2016-17, the shipping company presided over and founded by the entrepreneur Rachid Chrigui, has been the official transport of Ramos Communicaciones, which takes the production team as a VIP guest participating in the program, from Tarifa to Tangier Villa. The shipping company is in Tarifa with two vehicles for transporting people and vehicles, the boats are "Borat" and "Maria Dolores", both cross the strait in about 45 minutes depending on the sea conditions. It is the transport used by most of the tourists who want to visit the city of the neighboring country.

The singer Falete next to Jose Luis and Félix Ramos

Between the famous that have travelled in the years in Intershipping, is the singer Falete, the actress Malena Gracia, that outside Miss Spain Verónica Hidago, the Dj and participant of reality Abraham García, the presenters of television José Manuel Parada or Agustín Bravo, The ex-contestant of MyHyV Luis Kremleva, singer and ex Kiko Rivera Lorena de Souza, the glamorous Carmen Lomana and many other personalities.

For the tenth anniversary of Ramos Comunicaciones, Intershipping has wanted to be the official transport of the guests, offering the comfort and the first level service in a company that is leader in the maritime transport of Morocco. All over the world "from around the world" from the producer.