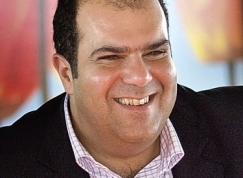 Battle royal is about to break out between two of the leading low cost airlines that fly to Malaga and the Costa del Sol. EasyJet's founder, Sir Stelios Haji-Ioannou, said he has launched libel proceedings against rival Ryanair's chief executive Michael O'Leary in a fresh spat between the European budget airlines. A spokesman for easyJet said the writ has been issued and will be served early next week.

The action follows a Ryanair ad campaign that pictured the easyJet founder with a Pinocchio-style long nose. Stelios said full details of the claim will be published later this month and that he will seek "substantial damages" for being branded a liar. "With this advert he went too far and I am obliged to draw the line here. This is a libel action about my own reputation as an individual, not about comparing the two airlines," he said in a statement Friday.

Thursday O'Leary challenged Stelios to a race around London's Trafalgar Square to settle their dispute and repeated the challenge in a statement issued Friday in response to easyJet's announcement of legal action.

"Stelios obviously can't run, but he can't hide either!," O'Leary was quoted in the Ryanair statement as saying. "If he's too scared to run then why doesn't he accept our challenge to a bout of Sumo wrestling instead," he added.