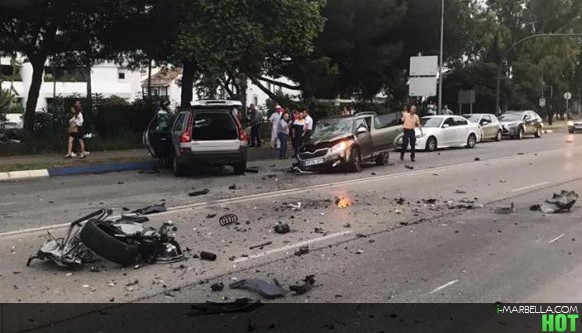 
A vehicle entered today 28th of May 2017 at 9 pm, the promenade of Puerto Banus, running over several people. British man arrested after seven-week-old baby and several adults injured when car mounts pavement and slams into pedestrians in Marbella near Puerto Banus nightspot the Ocean Club. According to sources of the investigation, it was a drunk driver who has jumped a control of the Civil Guard.

The unnamed 22-year-old guy spent some time at the nearby Ocean Club where he didn't show any signs of violence and he didn't have any kind of fight. Ocean Club Marbella was hosting its annual champagne party.

Ocean  Club is celebrating its annual Champagne party, at which revellers often end up spraying each other with expensive bottles of bubbly.

A vehicle has run over several people this Sunday, May 28, 2017, in Puerto Banús, Marbella, according to sources of the National Police and City Council.

The incident occurred around 9:00 pm when the man, who drove an SUV, has jumped control of the Civil Guard in the urban area of Puerto Banus.

The agents have followed the driver who entered a pedestrian only access road to the promenade and has run over several people, after which he continued to flee.

Injuries included broken legs and a fractured pelvis while one person is undergoing tests after being knocked unconscious.

Six people were taken to the nearby Costa del Sol Hospital. One was being operated for a broken leg, another is believed to have suffered a possible fractured pelvis and a third arrived unconscious and is undergoing tests.

The vehicle then headed to Marbella, on the A-7, where, at the height of Coral Beach, it has collided with several vehicles causing injuries to five other people.

Several ambulances of the health centre of Las Albarizas have transferred the wounded to the Hospital Costa del Sol.

The Civil Guard has finally arrested the driver and his companion.

3. Video in front of Ocean Club entrance Puerto Banus Marbella 28 of May in 2017

The police pursuit in Marbella ends with a crash accident right in front of me, caught on video. This happened around 9 PM 5/28/2017

The Top Gallery and Top Image of this Month are..