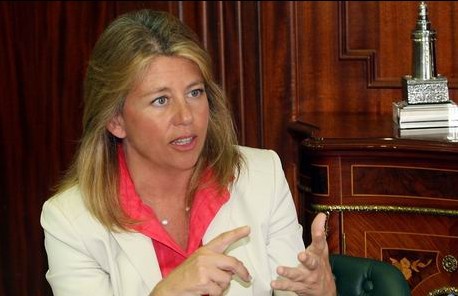 It means the upmarket hotel, a favourite for celebs and TOWIE stars, will no longer be able to host its popular champagne and pool parties that has made it one of the most profitable businesses on the Costa del Sol.

It comes after years of complaints from neighbours who filed an astonishing 700 lawsuits against the hotel, which were ignored by PSOE mayor Jose Bernal.

The license revoke comes after owners of the hotel brand released CCTV footage of a terrifying gangland style attack which saw a masked individual set fire to the establishment before throwing a live hand grenade for good measure.

Sisu is said to be just the beginning for newly reinstated Muñoz, who met with local police in Puerto Banus yesterday to launch a crackdown on ‘loutish tourism’ which is said to have tarnished the town’s image.

“Security is a priority in Marbella and we all have to take care of it and empower it,” said the mayor, adding that the priority of her government will be ‘to improve the image citizens have of the Local Police.’

“Marbella has a very good Local Police and the fact that at some point there has been dysfunction has not been for lack of professionalism, which is absolute, but due to management,” she said.

The mayor’s remarks came a day after councilors from Commerce and Nueva Andalucía, José Eduardo Díaz and Cristóbal Garre, met with representatives of the Association of Businessmen and Merchants of Puerto Banús (AcoBanús).

The local is working to change the reputation of Marbella and more changes are expected.