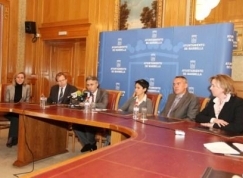 The Think Tank Advisory Group comprises representatives and foreign business groups in the area, among which are the Center for Tourist Initiatives (CIT), the British Chambers of Commerce and German-American Club and Dutch Business Club

The Marbella Town Hall, through the municipal delegation of Tourism, has launched an advisory group, called the Think Tank Advisory Group. The project seeks to advance economic development in the town and its surroundings.

"The group will develop joint actions to achieve integration between the business community and foreigners resident in Marbella in the first phase and then address Spanish business in the second phase", stressed the Councilor for Tourism, José Luis Hernandez.

He stated that 137 nationalities living in Marbella for that "must be integrated to become a rich resource, not an element of division".

Mr Hernandez explained that the initiative comprises representatives and business groups in the area among them the British Chambers of Commerce and German-American Club, Dutch Business Club, in addition to individual entrepreneurs.

The "Think Tank Advisory Group" has already become operational and the first event will take place on April 14 at 16.30 at the Congress Centre. The first of the Annual International Business Association of Marbella, which will address draft issues such as the new General Urban Plan (General Plan), the project of the Consortium of Tourism and the presentation of the participating groups themselves.

The advisory group also works on other actions and activities to achieve its objectives. Among them are the proposal to hold a trade show in Spanish and foreign entrepreneurs through the ILC or the "Buddy Program" that will look for companies with a complementary profile to develop joint business projects.

It will also develop networking initiatives, such as golf tournaments, which will allow the City Council set the stage for the business has a permanent and direct contact.  It is also expected to carry out specialised language classes, which are highly demanded by foreign businessmen, and an advisory service on public grants and applicable to businesses that develop this business group.

Finally, the councilor for Tourism was accompanied at the presentation  by Laura Stanbridge, representing the British Chambers of Commerce and the American Club, Jose V. Rehnelt, the German Chamber of Commerce and entrepreneurs Simon and Marina Robertson, Michael R. Foltinger and Louise Cook.
<-->