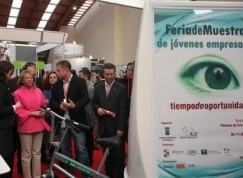 Ángeles Muñoz at the one of the stands Source: Gabinete de Prensa/Marbella Town Hall

Marbella Mayor, Ángeles Muñoz, yesterday opened the Young Entrepreneurs Exhibition at the Palacio de Congresos. More than seventy businesses are taking part in the Exibition, which runs until December 4. In her opening speech the mayor commented that, although the country as a whole was suffering from a grave economic crisis, events like this were vital to restart the ecomomy and offered the opportunity for young people to find work or find out more about what other young entrepreneurs were doing.

The Mayor then took a tour and visited several of the stands at the exhibition, which has been organised by both the Young Entrepreneurs Association of Malaga and the Marbella Town Hall Department of Young People.

Andrew 04-12-2009 16:06 Good to see Marbella trying to something for the local economy. Though red tape is still something of a nightmare
0