Its 65th boutique in its 65th year 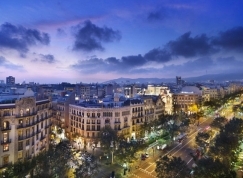 Brioni is celebrating a new success story in Europe, in creative, elegant Barcelona just a stone’s throw from the Casa Batllò and Gaudì’s Pedrera on the splendid Paseo de Gracia where the most sophisticated design, shopping, entertainment and accommodation establishments meet in a magnificent setting.

Brioni’s 300 square metres over three levels in the Hotel Mandarin are an excellent example of this: spectacular open spaces for the men’s and women’s collections have been set up that integrate the Brioni concept with the Hotel’s recent renovation, carried out by Carlos Ferrater and Patricia Urquiola. The large sofa in the lounge area is by the same Spanish designer, Patricia Urquiola, who has a studio in Milan. The sofa can be found in the authentic Brioni lounge, where customers can take some time to relax or conveniently choose from the men’s and women’s Made to Measure lines, with their, as ever, exclusive fabrics and models that reflect the sartorial skill of Brioni’s master tailors.

“During one of the meetings on developing the retail channel,” says Andrea Perrone, Brioni President and CEO, “we realised that the number of stores around the world coincided with our 65th anniversary in 2010: our world map and our diary offered us more than one possibility, but the choice for boutique number 65 fell to Barcelona, one of the most vital and innovative European centres of fashion and trends. We are very proud to sustain our strong relationship with our Spanish clientele, thanks also to the boutiques in Madrid and Marbella; we also firmly believe that this boutique will have plenty of international clients, especially as the Hotel Mandarin is such an attractive location and lies in a setting that was particularly inspiring for our architects, who have provided us with one of the most appealing of the Group’s boutiques.”

The opening of the Barcelona boutique follows the recent openings in Istanbul, Beirut and Lugano. Over the course of the year new openings are in the pipeline in Shanghai and Beijing, as well as in Dusseldorf and Mexico City.