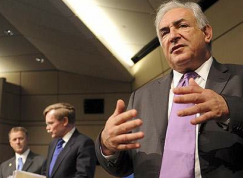 The head of the I.M.F. Dominque Strauss Kahn Source: EFE

It notes too that Spain and the United States have destroyed two thirds of the employment in the developed world.

Following on from the news that the Minister for the Economy, Celestino Corbaco, is to leave his post and stand on the candidate list for the Government in the Catalan elections, trade union CCOO has warned that his replacement could be ‘even worse’. There is some speculation in the press that Manuel Chaves will be given the job at the Ministry for Employment and Immigration. Colleagues have praised his work, while the P.P.opposition have been critical, saying that it is not by chance that the person to leave the ship is the Minister for Employment. Meanwhile the Catalan party CiU thinks his addition to the Socialist list will weaken José Montilla and the Socialists.

The Government is planning to end the extra 426 € monthly help to the unemployed, whose regular entitlement to dole has expired, in February. It comes as spending restrictions mean that the funds for unemployment will be frozen next year in the new State Budget for 2011. Minster for Tax and the Economy, while not wanting to announce the end of the payment, has reminded her audience today of the temporary nature of the policy.

El Mundo reports today that Jaume Matas, the ex P.P. President of the Baleares awarded a contract worth 1.3 million € to the company which carried out his successful campaign in the regional and municipal elections in 2007. The contract was not put out to tender but the company, ‘Over Marketing’, handpicked. ‘Over Marketing’ is now linked also to the Gürtel corruption case. Consumer confidence has risen in Spain for the third consecutive month, following an improvement in the economy. The data from the Official Credit Institute, shows confidence to be finally higher than at the worst moments of the recession, with the index up 1.3 points in August to reach 74.9.

The European Central Bank has revised forecasts for growth for the year, saying the economy behaved better over the second quarter and the summer. It has placed the forecast GDP at between 1.4% and 1.8% compared to the previous range of 0.7% to 1.3%. Export and Import prices have increased for the eighth consecutive month, wtih exports up 5.4% compared to a year ago, and imports up 9.2% in price. The data comes from the National Statistics Industry and is for the month of July.

The EU has reached agreement to unify the supervision of the financial system, and have created three new regulatory bodies to supervise the banks, insurance and the markets. Open bank, the online bank from Banco Santander, is now the only online operation in the country to still be reporting losses. Over the first six months of the year the other three digital banks operating in Spain showed a profit of 16.5 million.

Zara obtained 1,200 orders within the first few hours of the opening of their online fashion store. Inditex is seen by many to have arrived late to online selling, but the Zarahome brand has been online for some time.