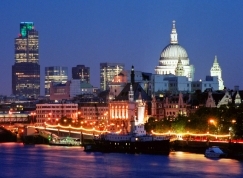 It is official – Westfield London is open!
With 265 shops and 49 restaurants it is set to excite shoppers and diners in England’s capital. The dining offering is something completely new to the UK with no McDonalds or plastic trays – just great food, healthy food, new concepts, michelin starred restaurateurs, a street of 17 restuarants, 13 culinary counters in a shared dining environment – so as well as a retail feast, Westfield London offers a shoppers a never ending culinary feast.

A NEW LIGHTFOR LONDONLondon’s retail landscape changes forever as Westfield London opens its doors to shopperstoday after almost four years in the making.Westfield London is an architecturally stunning showcase for five anchor stores: Debenhams,Next, Marks and Spencer, House of Fraser and Waitrose.

This iconic building, with its undulating glass roof, is home to more than 280 luxury, premium andhigh street retailers from more than 15 countries, together with 47 places to eat. The WestfieldLondon site in W12 spans nine postcodes and is the largest city-centre shopping mall in Europe.Fourteen retailers today make their UK debut and dozens of others are creating stores that willset new standards in retail design.More than 21 million people are expected to visit Westfield London each year – some 60,000 a day.

The centre will employ 7,000 people, which together with substantial investment in transportinfrastructure, will contribute to the regenerative impact Westfield is having on Shepherd’s Bushand the surrounding communities.Attention to great service is paramount: a concierge and valet team have been trained to 5-starhotel standard, and will help create an environment where shoppers’ needs come first.

Services being planned to make the experience compelling and comfortable include home delivery,personal shopping, style advice, hands-free shopping and valet parking.Food is as important as fashion at Westfield London. Forty-seven places to eat and drink boast73 awards between them and offer some 25 styles and nationalities of cooking. Six are new tothe UK and, of those, five are first ever seen brands.

Seventeen restaurants run the length ofSouthern Terrace, the pedestrian dining street, and open cooking brings drama on The Balconywhere fresh food from 13 counters is prepared fast and to order.A stunning central Atrium, unique in London, will host a full calendar of arts and educationalevents beneath a spectacular glass roof. A 14-screen state-of-the-art cinema will open in late2009, and a new library will serve the local community.

New transport links make Westfield London the best connected shopping destination in the UK.Westfield is 20 minutes on the Underground from Piccadilly Circus, 20 minutes from Heathrowairport and one and a half hours from Brighton. Cycle bays, secure pedestrian routes and 4,500car parking spaces directly beneath Westfield London complete the transport picture.Leona Lewis, London’s international music sensation, today stars in the spectacular launchcelebrations, which included a cutting edge fashion show, thrilling performances by the LondonCommunity Gospel Choir, the Young Guns Orchestra and a ribbon-cutting ceremony by BorisJohnson, London’s Mayor.

The celebrations will continue through the weekend, with further fashion shows andperformances by music acts helping to create a great experience for London’s new generation ofshoppers.See www.westfield.com for background information on Westfield.