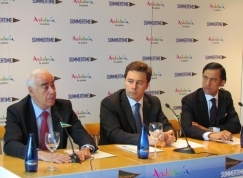 
The initiative is part of the campaign "Summer Fashion 2011" that the Corte Ingles launches each year under the slogan "Summertime".

El Corte Ingles Group and the Regional Government have signed a collaboration agreement for promoting Andalusia as a tourism destination. The head of the Department of Tourism, Commerce and Sports, Luciano Alonso, and Dimas Gimeno, CEO of El Corte Ingles, signed an agreement whereby the beaches of Andalusia will serve as the main locations for the new summer swimming costume campaign due to be launched later on in the year.

Signed within the framework of the "Summer Fashion 2011" campaign, the aim of the agreement is to promote Andalusia as a tourism destination and make the most of the charm and beauty of Andalusian beaches as a setting for presenting the new swimming costume collections. With this promotional activity, the Regional Government wants to continue heightening awareness of the region’s tourism resources in the rest of Spain, as it has done on previous occasions.

In addition to including Andalusia and its beaches in the Summertime catalogue, a video about how the campaign was filmed will be posted on El Corte Ingles’ fashion website, along with information about the beaches and places used as locations.The  Andalusian tourism brand will be present in El Corte Ingles’ 89 department stores as well as in the group’s 500 travel agencies, with the aim of promoting the region as a tourism destination. Furthermore, the campaign will include a lucky draw with the chance to win one of 100 weekend breaks in a wide choice of Andalusian destinations.

The George Gershwin classic Summertime, which has been performed by singers such as Ella Fitzgerald, Janes Joplin and Keith Jarrete, will be used as the sound track of "Summer Fashion 2011", El Corte Ingles’ coming ad campaign. On this occasion, the song will be performed by Alba Molina, the Seville-based singer and daughter of the flamenco duet Lole and Manuel.