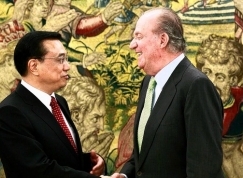 
The deals, signed this week, are worth $7.3 billion


Mr. Li, widely expected to become China's next premier within the next two years, told Mr. Zapatero that China wanted a united, strong and stable Europe, with Spain an important player in multilateral international relations. "China is a long-term and responsible investor in the Spanish and European financial markets, and it has confidence and great interest in the Spanish market," Mr. Li said on the second day of a nine-day tour of the European Union in a show of support for China's largest export market.

The contracts cover 16 sectors, including energy, banking, telecommunications, transport and agriculture, but by far the most valuable one was the sealing of a previously announced $7.1 billion acquisition of certain Brazilian assets of Spanish oil firm Repsol YPF SA by China Petroleum & Chemical Corp., or Sinopec.

Repsol said that the two companies pledged to work towards new business opportunities world-wide. Spain's Industry Ministry also said that Spain and China will "strengthen their relationship" in the energy sector and collaborate on foreign investments.

Among other contracts to be signed were deals for China to purchase $13.5 million of meat products, $9 million of olive oil, $6 million of wine and $260,000 of ham from Spain, the state-run Xinhua News Agency reported.