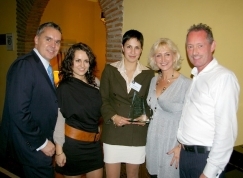 The DSP team receive their award Source: The Resident


DSP won the award in its first year of trading


Presenting the award to the DSP team was Maurice Boland of Talk Radio Europe The proceeds of the raffle drawn during the awards were also donated to the Haiti appeal. Entertainment for the evening was provided by the talented singer and runner up in the 2009 WOW factor contest, Rebecca Tate and 4Business International member and entertainer, Trevor Hamlett.


Del Sol Packaged were up against some tough competition and Marina Robertson, Director of DSP was thrilled to have received the award and said ” We were flattered to have been nominated, but to have won the Business of the Year award is a fantastic achievement in our first year of trading, I would like to thank all the members of 4Business International for voting for us and for recognising the standards of service we have been striving to achieve”