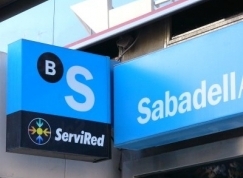 Spanish retail bank Sabadell (SABE.MC) said that it expects its bad loans ratio to peak at around 5 percent in the third quarter of 2010, as the impact of the global crisis begins to abate.

Spain's fourth largest lender set aside 837.7 million euros  for provisions in 2009, primarily against sliding property values, including writing down 184.3 million euros against its 10.9 percent stake in real estate firm Metrovacesa (

Spain's property sector is in a steep downturn after a decade-long boom and many of the country's banks have taken stakes in real estate companies in exchange for cancelling debt.

Recently the  country's second-largest bank  raised broader doubts about Spanish banks' ability to absorb a property market crash after it said it had set aside 6.6 billion euros to deal with higher than expected provisions for struggling developers.

Despite the provisions, Sabadell's 2009 net profit beat analysts forecasts, mainly due to earnings generated by financial operations -- including asset sales and the buyback of preferential shares -- which nearly quadrupled in the period. Net profit came in at 522.5 million euros beating analysts forecast for 491.4 million euros.

In 2008, Sabadell's net profit was swelled by 512 million euros capital gains from the sale of its insurance and pensions business to Zurich."The results are better than we forecast, mainly due to the strong contribution from financial operations. Bad loans are still fairly contained at the bank," an analyst who requested anonymity said