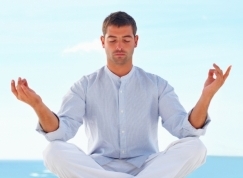 
Prisoners in India are being freed early if they take yoga classes. For every 12 weeks the criminals spend learning and practicing the gentle form of exercise, they can reduce their time behind bars by 15 days.

At present, over 4,000 inmates in prisons in the Madhya Pradesh state are taking part in the scheme and officials believe many are going on to teach the relaxation technique themselves after their release.

"When a prisoner attends yoga sessions and fulfils some other conditions, he will be considered for a remission if his jail superintendent recommends his case."