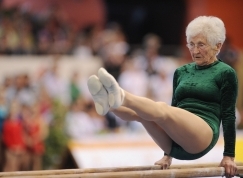 Gymnast Johanna Quaas(86) performed an impressive parallel bar and floor demonstration after the finals at Germany's Cottbus Challenger Cup. According to the World Records Academy she set the new world record for the Oldest Gymnast.

Johanna, who comes from Halle in Saxony, took up gymnastics when she was 30 and proving that sport is the preserve of the young! See the video of her performance below and tell us what do you think?