Megan Fox Ditched Vegan Diet to Get Curves Back 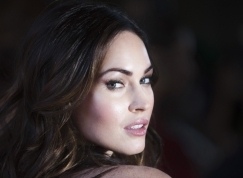 
Megan Fox has got her curves back since ditching her vegan diet.

The 25-year-old actress had been sticking to a strict eating plan based on the vegetarian lifestyle — which doesn’t allow followers to eat meat or any foods made from animals — but she wasn’t happy with the results because she lost too much weight.

“For a year and a half, until about four months ago, I followed a strict vegan diet based on raw fruits and vegetables, no bread, sugar and coffee. But I had lost too much weight,” Megan said.

Megan — who is married to actor Brian Austin Green — now eats all the food groups but makes sure she limits the high-calorie meals she ingests. “So now I eat a bit of everything. And I train three times a week doing circuit training,” she added.

Her diet isn’t the only thing Megan is changing I her life. The Jonah Hex star is also removing the Marilyn Monroe tattoo she has inked on the inside of her right arm because it has “negative energy”. “I’m removing it. It is a negative character, as she suffered from personality disorders and was bipolar. I do not want to attract this kind of negative energy in my life,” she said.