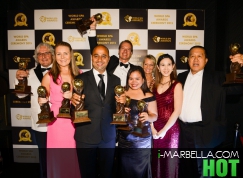 We are delighted to announce that ‪QMS Medicosmetics‬, the brand used at Six Senses Spa Marbella, has received the World's Best Spa Brand Award 2015 by World Spa Awards.

The World Spa Awards are a new and dynamic awards programme for 2015, the aim of which is to drive up standards within the spa industry by rewarding the organisations that are leaders in their field.

Originated by the organisation World Travel Awards, currently celebrating its 22nd anniversary, which already successfully runs the World Ski Awards and the World Golf Awards. The World Spa Awards is being launched into the highly lucrative and rapidly growing spa tourism industry. Spa tourism constitutes a vital segment in the global travel and tourism marketplace. Between 2007-2013, the spa industry has grown 58% generating in excess of $94 billion in revenue. There has also been a growth in spa locations by 47%. Between 2012-2013, wellness tourism has risen 12.5% generating a revenue of $494 billion.

World Spa Awards was developed in reaction to overwhelming demand from the spa industry for a programme that was fair and transparent; a programme with a mission to serve as the definitive benchmark of excellence, and to help to foster a new era of growth in spa tourism.

The 2015 World Spa Awards ceremony was held on the 14th of September 2015 at the InterContinental® Danang Sun Peninsula Resort in Vietnam.

The World Spa Awards programme has categories for the Best Hotel Spa, Best Wellness Spa, Best Spa Destination, etc. A number of categories exist on a world level only, such as Best Airline Lounge Spa, Best Cruise Line Spa, Best Spa Brand, Best Desert Spa, etc. The individual country level winner with the most overall votes will not only win the national award, but also the world level award in the respective category.

Founded over 20 years ago by German surgeon and skincare pioneer Dr. med. Erich Schulte, QMS Medicosmetics's collection of skincare and spa treatments is globally recognised for its exceptional effectiveness.

Dr. Schulte's passion for advancing the science of skincare is reflected in each personally developed formulation. The result is a unique skincare system that has been scientifically perfected through years of clinical research and dedication to delivering the perfect balance of state-of-the-art ingredients in combination with the most advanced transdermal carriers. These highly effective products are the basis of QMS Medicosmetics Treatment Collection featuring signature facial and body conditioning treatments styled for their superior results.

With an impressive hotel partner portfolio including The Saxon in Johannesburg, Six Senses Spa at The Alpina Gstaad, Javvu Spa at the Amilla Fushi, Mandarin Oriental, Bangkok, J.W. Marriott Venice Resort & Spa, Burj al Arab, and many more, QMS Medicosmetics distinctive style can be experienced all around the world.

Dr. Oz: There are 5 Biggest Life Adjustments to Live a Longer and Better-Quality Life!