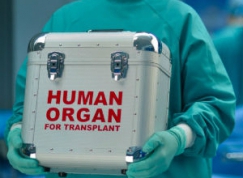 
Spain continues to hold its place as the global leader in the number of organ transplants conducted, according to new figures released on Tuesday.

The National Transplants Organization (ONT) reported that in 2014 Spain once again broke its own record after carrying out a total 4,360 transplants. Figures show that there was a donation rate of 36 donors per one million inhabitants last year – higher than France, where there were 26 donors per million, and Britain, where there were 21.

Spain has been the world leader in organ transplants since 1992.

During a news conference at the Health Ministry, officials said that Spain also broke records last year in relation to the number of kidney and heart transplants. A total of 2,678 kidney transplants were carried out in 2014, up five percent from the previous year, and 265 patients received new hearts, up by six percent from 20.

The ONT's intense activity is also reflected in another landmark figure – that for the amount of transplants carried out in one 24-hour period. On February 20, a record 45 transplants took place in 22 hospitals in 11 regions across Spain.

The number of donors who died in traffic accidents fell last year. The majority of organs (65.6 percent) come from people who died from strokes, said ONT director Rafael Matesanz. Half of all donors were over the age of 60.

As of January 1, there were 754 patients in Spain waiting for a new liver. Liver transplants for other causes besides hepatitis C have also shot up from six percent to 20 percent since the 1990s.

It can cost between €70,000 and €90,000 to carry out a liver transplant. This figure can rise to €130,000 when taking the costs of medical care during the first year after surgery into account, he said.