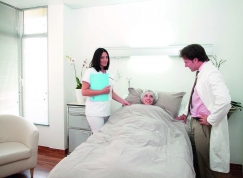 Losing a large amount of bodyweight – whether through diet and exercise or bariatric surgery – is a huge undertaking. It can therefore be very distressing to find you still do not look or feel how you imagined because of excess skin.

Loose, hanging skin is an unfortunate side effect of dramatic, rapid weight loss – the skin simply hasn't had time to shrink and tighten. Other factors that influence how loose your skin gets after losing weight include your age (we all know that skin elasticity decreases with age), skin type, and how much your weight has fluctuated in the past.

Unfortunately, there is no other way to deal with this excess skin than surgically because once skin is stretched no amount of exercise can restore it.

How much of an issue is excess skin for patients who undergo weight loss surgery?

A number of studies have been undertaken to ascertain the scale of the problem for post-bariatric patients. One such study, undertaken in 2013, included 57 patients who had previously had a body mass index (BMI) of 50 or more (18.5-24.9 is a normal BMI). One year after their surgery, the patients were asked about the amount of excess skin they had and how much discomfort it caused.

Further research by Sahlgrenska University Hospital in Sweden, conducted with patients who had been operated on between 1999 and 2008, also found both men and women, were unhappy about excess skin.

More than 90% of women who responded to the survey said they felt their body was unattractive, while 67% of men also felt unattractive.

The most frequently reported sites of excess skin were the upper arms in women (91%) and the abdomen in men (78%). In both women and men, excess skin on the abdomen was reported to cause the most discomfort.

Why can excess skin cause discomfort?

Sagging skin not only causes psychological distress, it can also impair the function of the body and quality of life.

A 2012 study with 252 gastric bypass patients found almost all of them developed surplus skin, which resulted in intertriginous dermatitis and itching. In addition, patients reported problems with physical activity (playing sports) and finding clothing that fit appropriately.

This man very bravely took to YouTube to show the impact of his dramatic weight loss and problem with excess skin (he went from 500 lbs to 230 lbs). As he states, despite working out intensively, he has been unable to improve the appearance of his sagging skin.

What can be done to correct excess skin?

There are a number of surgical options for removing excess skin – from a tummy tuck, arm lift, breast lift, or thigh lift, through to a full-body lift.

Tummy tuck, or abdominoplasty, is the most frequently performed procedure for patients suffering from loose skin following weight loss. This is an effective way to remove the apron of skin and fatty tissue that hangs down from the lower abdomen, known medically as a panniculus.

After the skin has been removed, the muscles of the abdominal wall are re-tightened from below the ribs to the pubic bone. This creates a flatter, firmer abdominal wall and prevents it from bulging when sitting or bending. Next, the skin is pulled tight and reattached, and the belly button is moved to its new position.

In addition to this, liposculpturing of the abdominal area can be performed to further improve the appearance of the tummy.

How long is recovery?

Approximately 2-3 days after your surgery, drainage tubes can be removed. The sutures (stiches) are dissolvable and don't need to be removed. Pain, bruising, and swelling are normal after surgery, but will typically subside after two to three weeks and can usually be controlled with over the counter painkillers.

You will be able to resume normal activity within a month of treatment and should immediately start enjoying the benefits of your new physique.

Removal of excess skin will provide you with enhanced freedom of movement, reduced chaffing, and make it easier to find comfortably fitting and flattering clothing.

If you have achieved substantial weight loss and are suffering from loose skin that you would like addressed, Ocean Clinic Marbella invites you to make an appointment for a no-obligation consultation. We can advise you on the best course of treatment to give you the body you deserve.