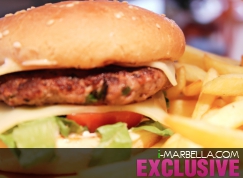 If you try to make fries at home, the mess, the cleanup, the left over frying oil, you just can't make them that good. Maybe, after I tell you the truth, you may not like them as well. All around the world, McDonald's make the same French Fries even Norway and China. Aren't they good! Their better than you can make? They are better than good. They're are perfect! But you don't want to know what they do to make them perfect… It's like the old sausage saying. Mmm! They are good! But you done want to know how they made them. I used to like to Super Size them. I just couldn't get enough. So salty. Crispy, and tasty!

I admit, I was a potato chip junkie and French Fries were just as addictive. Some things you should know before you eat them.

They are also Abominable like their hamburgers. They treat the sliced potatoes with preservatives that make them Abominable. Don't believe me? Don't take someone else's word. Take my McDonald's challenge. Buy a small hamburg and a small fries. Take them home. Store them for a couple months or a couple years. Notice, that they don't rot like hamburger meat or potatoes. Their Abominable!

McDonald's makes French Fries from a Russet Burbank Potato specifically anywhere in the world; Norway or China. Unfortunately, it is a difficult potato to grow. It very long and prone to get these little brown lines caused by an aphid (bug). You don't want these brown lines. Neither does McDonald's. They won't buy your potatoes if you farm these for McDonald's. What do the farmers do? They double spray them with a toxic pesticide called Monitor. How toxic is it? The farmers would go in the fields for seven weeks after spraying but the poor bees. They are goners! Then the poor farmers must store these potatoes flat in space the size on a football field for several weeks after harvesting to let the toxic chemicals leek out (hopefully they don't take them right to market). Then the processor turns them into the Abominable French Fry.

Never heard of the Abominable French Fry? Well, take my McDonald's challenge. Buy a small hamburger and a small French Fry and take them home. Store them a couple months, a couple years. Notice how the meat doesn't rot like hamburger meat and the fries don't change like normal potatoes. The preservatives that they use can preserve them almost as long as King Tut. The Abominable hamburger was invented in Norway.

If you think your country is different. Take my McDonald's Challenge!

Ed Trupkovich Blog #3: Sugar and Aspartame is Killing You! (2)