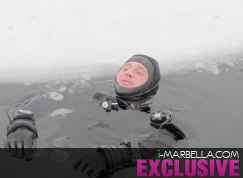 
Born in Estonia, Tanel Urm has travelled the world to pursue his passion - diving. He is an experienced tec diver and also an instructor, who has been diving since he was a very young boy. He has dived in China, Thailand, Estonia, Finland aso. i-Marbella finds out more about this interesting underwater hobby and especially about diving in the Baltic Sea.

1. How did you start scuba diving and how long have you been doing it?

I tried diving for the first time when I was really young, in the beginning just holding my breath and then later on with self contained underwater breathing apparatus(Scuba) to breathe underwater. My father definitely influenced me, since he was also into scuba diving. Currently I’m working in Technical Diving Estonia as the technical instructor an as the Captain of Deep Explorer.

2. How deep is the deepest you have dived to and what are the depth limits nowadays in ted diving?

I have dived down to 105 metres in the sea, to a 135 metre deep cave and in the Baltic Sea down to 84 metres. I have not tried to go as deep as possible, the goal is jus to go to interesting places. Cave diving is very difficult, both technically and also mentally.

3. What is the lowest temperature you have dived in and what attracts you to dive into freezing water in the first place?

The water is rather warm, what is cold is the state of mind. Even when you dive under the ice, the diver is warm, the ones up waiting are freezing. The temperature under ice can be -1 or -2 and because of its saltiness its not freezing. But the overall water temperature both in the summer and winter in the Baltic Sea is 2-4 degrees if you go deeper than 40 metres. There is an appropriate equipment for each situation. Diving is a lifestyle, pure pleasure. In addition I find it relaxing. When you’re underwater you live only in the moment, you have no worries about anything else but this very moment. When you go diving after a hard working day and then coming home after that you feel like you just spent a whole weekend relaxing. It really takes you out of your every day routine.

4. Tell us about some special place or moment during your diving career.

All the activity in the water is before anything theory, knowledge, preparing, learning and practising, so you don’t excel yourself underwater. There have been many important places, but the most important thing in my mind is that when my team goes underwater, everybody comes back up. I find teaching diving very interesting. Always new and fascinating, so there won’t be any boring routine. Even the exercises in the pool are fun with the students.

5. What is wreck diving and what is the purpose of it?

Wreck diving is the main reason for my dives. The boats and other objects underwater are exactly in the same state like they were when they sunk. Of course a bit older and rusty and partly destroyed but they offer real pleasure and a cool feeling. It’s like time travelling. Wreck diving is usually carried out to show the people the sunken ships, learn more about the historical wrecks, about the reasons why it sank aso.

6. Aren’t you scared of the drowned sailors? Is there also an etiquette to follow underwater?

No, I’m not frightened by them. I think the living ones are more scary. There are some wrecks where they have called it as a peace area because its a grave. Nobody is allowed to dive there, unless for a special scientific reason. In some of the wrecks, the human bones are actually visible. The main etiquette is not to touch anything on the wreck. The only things you can touch and take are photos, videos and memories in your head.

7. Can any person who knows how to dive got to a wreck?

There are different wrecks. Some of them don’t require any license, some of them are protected. You can visit some of them after finishing the protection of cultural heritage training. Me and our team Technical Diving Estonia MTÜ has these permissions.

8. What are the main Baltic Sea underwater attractions?

The Baltic Sea is an absolute paradise for divers, since there are lots of wrecks, that have preserved well, because of the saltiness, small amount of oxygen and lack of light in the sea. Its is such a mysterious feeling diving to a 200-400 year old wreck that used to be a wooden sailing board and you can still see the cannons. Also you can find the wrecks of war ships from the I and II World War. Supposedly the biggest known meteorite crater in the world is also in the Baltic Sea. It is called Neugrundi meteorite crater and you can see some incredible things there, including fish and seals.

9. What about sunken cities?

Atlantis remains to be found..But in the middle of China is an underwater town, that originates back to the year 1200, and currently lying in 25-33 metres underwater. All the houses, streets, walls are there.. a very interesting experience. Also in Estonia we have the Rummu reservoir that is an interesting place to dive to and where you can see buildings, technics, lights and even doghouses. You could also make an underwater theme park from the red monuments in Rummu, would you be interested in constructing that? Every month around 100 divers go to Rummu!

10. Tell us more about cave diving.

Cave diving is another reason i love to dive. I cave dive and also teach it. Usually every 10th divers learns to be a tec divers and every 10th tec diver learns to cave dive. Cave diving requires very good training, lots of knowledge, equipment and sticking to the rules. Being careless will kill you. There are no natural caves in Estonia, but there are plenty of old military objects under there. Diving there can be very risky. I have visited many of them, and they’re usually made of iron concrete and there are also some tunnels that have been made in the limestone group, they are very interesting but like I said risky to go to. Since you can see they have collapsed and it is easy to get lost in that maze. DO NOT DO THIS! Lots of divers, including instructors have died going into caves.

11. Have you had these moments when you’re saying to yourself that if I get out of this, this will be the last time I go diving?

Actually I haven’t had that moment. These moments occur more outside the water! But ok, one time when I was in 85 metre underwater in a cave and a mud avalanche started I was thinking in my head what the hell am I doing going to a rock underwater. But that was only for a second and passed.

I find the Baltic Sea shipwrecks quite dangerous, because of the huge amount of fishnets, old trawls aso. If you get stuck in one of them, things can quickly go critical. That is why the divers carry two knives, one in the upper body and the other one in the lower body and sometimes I even take scissors with me, because its not rare when the knife slips out of your hand..

12. How hazardous is diving then?

The fun diving is rather safe, since there are much more trauma cases in practising other hobbies. But tec diving is more dangerous indeed, that is why you need more training and equipment. But accidents happen usually because of many different factors coincide or just ignoring some important factors.

Cave diving is different. To become a good one you need to agree to yourself that if something fails you keep on working the same and stay calm, whether you only have 5 minutes to live. You cannot panic, have to stay calm and try to solve the situation. The best cave divers have been found dead without any marks of panic, just pure bad luck..

13. Has any of the divers “stayed underwater to work”?

Not many in Estonia. One tourist diver died diving in Estonia, but because of his health problems. But around the world the causes of deaths of the divers are different. There are a lot more deaths of just swimmers actually.

14. How can people contact you if they are interesting in diving in the Baltic Sea for example?

In Estonia the Essentio Holding OÜ is dealing with technical diving www.divetechest.com and we go underwater with our own stand Deep Explorer.

More inforation about Tec diving you will find here