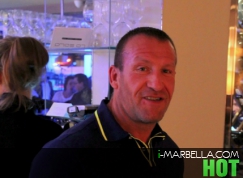 
The celebrity hotspot La Sala Puerto Banus welcomed one of the top athletes in modern bodybuilding history, Dorian Yates, over the weekend.

While enjoying his stay in sunny Marbella, the English bodybuilder spent Friday evening dining with friends at La Sala Puerto Banus. Dorian happily greeted his fans who recognised him at the restaurant, and he also kindly took photos with them. The English professional bodybuilder won the Mr. Olympia title six consecutive times and holds the fourth-highest number of Mr. Olympia awards of all time. Dorian Yates is widely considered one of the top athletes in modern bodybuilding history, ranking behind Ronnie Coleman, Lee Haney, and Arnold Schwarzenegger respectively.