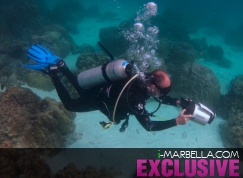 Born in Estonia, Tanel Urm has travelled the world to pursue his passion - diving. He is an experienced tec diver and also an instructor, who has been diving since he was a very young boy. He has dived in China, Thailand, Estonia, Finland aso. i-Marbella finds out more about this interesting underwater hobby.

1. How did you start scuba diving and how long have you been doing it?

I tried diving for the first time when I was really young, in the beginning just holding my breath and then later on with self-contained underwater breathing apparatus(Scuba) to breathe underwater. My father definitely influenced me, since he was also into scuba diving. Currently, I’m working in Technical Diving Estonia as the technical instructor an as the Captain of Deep Explorer.

2. How do you evaluate the level of the divers? Is it by the hours that you have dived or is it a field where you can never compliment enough?

The regular divers can complement themselves with different courses, that in some cases call for a certain number of divings, also some skills and increasing in depth. Technical divers will increase their equipment, the time underwater and also the depth how deep in they dive.

3. Have you counted the hours you have spent underwater?

I have closed the diving logs after a certain number of hours and it ended after I reached 500 dives. Right now I make around 200 dives a year. I still make logs when I dive with special equipment such as rebreathers and also when I do cave diving.

4. I assume with your diving level and skills there is hardly anything that scares you underwater?

I am the instructor for regular and also technical diving for many different organisations such as PADI, DSAT, CMAS, TDI, SDI.  The official limits for diving are until 100m, after that you take your own risk. All of the studies and preparation includes theory, exercises and skills, so I guess you can say that I don’t get scared easily.

5. How does technical diving differ from regular diving?

Regular scuba diving goes up to 40 metres in depth, where one can stay underwater for a maximum of 8 minutes. Technical diving takes you deeper than 40 metres and the time spent underwater is not limited. Also, equipment and training are different. Regular scuba diving is for fun and its totally safe. The technical diving course starts with a sentence like this: you must accept the extremely high risks of tec diving and you might die. If you cannot accept that please go home.

Technical diver plans his dives to every detail(depths, gas, time, decompression etc) and executes the plan by the minute. There is also the backup plan if the original plans fail for example.

6. Where in the world have you travelled and dived and where do you plan to go?

I have dived a lot in Thailand, where I spend 3-4 months every year. The climate and aquatic biota are very peculiar. I have also dived quite a lot in the Baltic Sea, also in Norway and Finland. In the near future, I’m planning to go to the Mediterranean Sea and dive to the largest shipwreck called “Haven” of the world that is 331m long and 51m wide. And I definitely want to go one-day diving to the Andrea Doria wreck and to the French caves.

I have also dived in China, where we were taken to an underwater world that was sunken into a reservoir. The ways of a totalitarian country can be pretty unpredictable. They swelled a whole lake and sank a “small” village just to get electricity. Around 300 000 people were evacuated by the army. It was not until later, it appeared that it was an ancient city full of unique wooden architecture.

7. How deep is the deepest you have dived to and what are the depth limits nowadays in ted diving?

I have dived down to 105 metres in the sea, to a 135-metre deep cave and in the Baltic Sea down to 84 metres. I have not tried to go as deep as possible, the goal is just to go to interesting places. Cave diving is very difficult, both technically and also mentally.

To go to a 135-metre deep cave, where to bottom is on 245 metres is quite a challenge. This cave I dived to was the deepest cave is Asia called Sra Keow, located in Thailand. Three-hour drive from Phuket, in the middle of a jungle, where two ponds with a 25-metre diameter were the entrance to the cave. It was a shaft like a cave, varying from 7-25 metres in width. We have another expedition planned this winter, to go down to 180 metres. Over that depth, things get extremely risky and too expensive. If you dive so deep, you have to take into account the high pressure there, since going down every 10 metres, the pressure rises in 1 atm.

8. How expensive is diving and who pays for it?

Normal scuba diving has regular hobby costs since it should be accessible to everybody. The courses start at 300 euros, equipment is around 1000-2000 euros and rent is 20-40 euros per day. Technical diving requires a lot more expensive and also more equipment varying from 2000-12 000 euros. Also, the special gases are rather pricy, having to pay 70-150 euros per dive. Generally, the equipment of technical diving one can’t rent, if only partly. Everybody has to find their own finances.

9. Is it possible to get rich by diving? Maybe finding a treasure in a wreck?

Yes in the movies they show this treasure finding a lot. You will definitely get rich in your soul if you’re doing something you love. The waters are full of riches, hopefully, everybody finds their own treasure.

10. What are nitrogen narcosis and oxygen poisoning?

Nitrogen is part of normal air that we breathe, comprising 79% of it. In a normal state, nitrogen is rather inert. But going underwater where the pressure rises, also the partial pressure of nitrogen goes higher and the extra nitrogen is deposited in your body. Then it is not so inert anymore and over 30metres underwater nitrogen becomes narcotic. Everybody has nitrogen narcosis, but a more experienced diver can handle it better. Narcosis occurs in different ways but its quite similar to being drunk from alcohol. And it can also create blackouts so you might not remember what happened underwater. If the body is under the pressure for a long time, then it becomes saturated of the nitrogen and as soon as the pressure decreases, a saturation breaking point in the body meaning the body cannot hold the extra nitrogen in itself and nitrogen gas bubbles begin to form causing decompression sickness (DCS).

21% of the air is made of oxygen and we need it to live. But too much oxygen can be harmful and even lethal. When you dive and the pressure rises, the pressure of the oxygen rises also and the air becomes poisonous after 65metres underwater. Pure oxygen becomes harmful already after 6metres. There are different partial pressure limits that you have to observe. Low, but prolonged oxygen overdose causes pulmonary lung injuries. High and short term oxygen overdose causes central nervous system problems that lead to drowning. That is why it is extremely important to know what you’re doing when playing with a special gas and deeper depths.

11. Is there also a hangover like after alcohol poisoning?

Haha.. this intoxication is dangerous only underwater. But yes, sometimes after coming up to the boat divers are in a cheerful mood around 15 minutes, but that is not only because of the nitrogen narcosis but also because of the adrenalin that you get underwater. So there is no hangover! But diving can be very addictive and incurable. I have heard stories of men who have sold their cars, left their wives also just to buy better equipment and continue with their hobby. Endless story..

12. How would you describe the people who dive? How are they different from others?

They are different of course. They’re athletic, strong and healthy and definitely very sexy people.

13. How can people contact you if they are interesting in diving in the Baltic Sea for example?

In Estonia, the Essentio Holding OÜ is dealing with technical diving www.divetechest.com and we go underwater with our own stand Deep Explorer.

You can contact with Tanel Urm via e-mail tanelurm@gmail.com and book the diving trip at Baltic Sea with Deep Explorer.