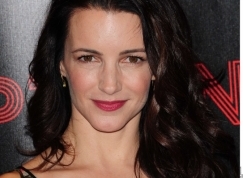 Kristin Davis says: “It’s a hard workout. I pour sweat. Every piece of clothing I have is wet when we finish. It sounds a little gross,” the actress told PEOPLE at the 7th Annual More magazine and Fitness magazine Women’s Half Marathon in Central Park on Sunday.

So, what led the star to take up the grueling two-hour-a-day workout? “I didn’t realize, but I had been developing my abs kind of outwards,” explained Davis, describing her previous workout’s unintentional results, adding, “We don’t want that!”

And though the 45-year-old beauty reveals that her toned results will be on display in the upcoming Sex and the City 2– in theaters May 27–she was expectedly coy when it came to her character’s plot. “You know when people see the trailer they kind of leap to hypothesizing. I don’t want to prove or disprove any of those theories. I would say [Charlotte is] experiencing challenges  rather than conflicts–challenges that are certainly very relatable to everybody,” teased Davis. – Mary S. Park.

Sex and the City 2 Spoilers