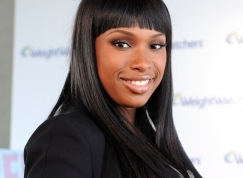 
Singer and actress Jennifer Hudson joined the Weight Watchers and since then she has lost a lot of weight.

Even before becoming pregnant and gaining 35 lbs. with son David Otunga Jr.,Jennifer Hudson hated running and wasn’t a huge fan of the gym. But as soon as she got her doctor’s OK to start working out, the former American Idol star met up with L.A.-based trainer, Harley Pasternak, to start slimming down for her role in an upcoming film on Winnie Mandela.

She got her diet on track by starting with Weight Watchers in January–recently debuting as their newest spokesperson. And their aim was specific, Pasternak says. “Our goal was to bounce quarters off her butt!” Pasternak, author of The Five-Factor World Diet, explains “We had to start off with simple work-outs.”

With a focus on images of Winnie Mandela at her fittest, Hudson started off with a 25-minute circuit-training routine of cardio, lunges, shoulder presses, and ab exercises five days a week. Eight months later, she’s worked her way up to 50-minute routines, now including 25 additional minutes of cardio.

Jennifer Hudson before and after the weight-loss!Gallery!