How to be a Mermaid: Spanish Swim School Gives Tips 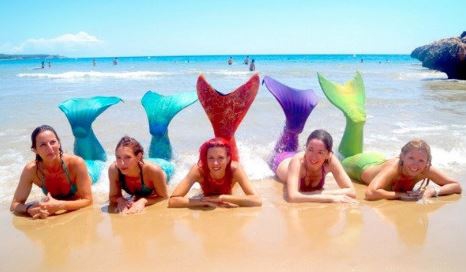 A horrible accident inspired one Spanish woman to follow her lifelong dream... to become a mermaid and help others follow in her wake.

If you've always fancied living out a real-life version of Splash, or following in Ariel's footsteps, then an extraordinary course in Spain could be just what you are looking for.

The Sirenas Mediterranean Academy, in Tarragona, just south of Barcelona, is bringing the mythological to life and helping thousands of people from around the world to follow their dreams by becoming a mermaid -- even if only for the day.

Its founder Susana Seuma, born inland in Lleida, Catalonia, was always drawn to the sea - completing her diving and lifeguarding qualifications at a young age, she was lured into the sport of freediving - diving as deep as physically possible using only the air in your own lungs.

But a serious car accident, which shattered her legs, inspired Seuma to follow her -- rather unusual -- lifelong ambition.

"I said to her 'you swim so much you're just like a mermaid'," Seuma's partner Alejandro Rodriguez said, recalling the many hours Seuma spent in hydrotherapy recovering from the accident.

"She was swimming a lot to help repair the damage to her legs and it was then she told me her dream was to be a mermaid."

With Rodriquez's encouragement, Seuma lauched Sirenas Mediterranean Academy in summer 2014 in Tarragona, northeastern Spain, and in the process, lured her boyfriend into the merfolk lifestyle.

"We were chasing her dreams but we ended up sharing them," Rodriguez, who now regularly enjoys dressing as a Triton -- or merman -- said.

Mermaids -- the mythical creatures that have the body of a woman and the tail of a fish -- have captivated the imagination for centuries.

From the sirens of Greek mythology and Columbus' famous sightings of mermaids in the Caribbean (which, it has since been suggested were probably manatees) to Danish author Hans Christian Anderson’s enduring classic The Little Mermaid which inspired the Disney animated film.

More recently, online communities of mermaid aficionados have flourished. Websites such as the MerNetwork attract those fascinated by mermaids as a platform to compare tail prices and chat about their favourite depictions of mer people in popular culture.

"For people in the Mediterranean, mermaids are part of our culture," Seuma said.

The academy offers a range of mermaid classes -- starting with beginners sessions -- or "baptisms" during which participants learn the basics of tail control as well as the history of mermaid mythology.

"Once in the water, the students learn floating, sprinting, and resting movements as well as different styles including mermaid, dolphin and seal. We then focus on different moves including immersion, vertical and spins," Rodriguez commented.

Perhaps the most essential part of any mermaid's attire is her tail, and Sirenas Mediterranean Academy makes all of its own, a beautiful array of different colours costing between €150 and €189.

You might imagine that the majority of participants in the mermaid classes are little girls, eager to become a real life Ariel like the character from Disney's The Little Mermaid.

"Most of our students are girls, but we have students of all different ages and are becoming increasingly popular with men -- we recently had a 73-year-old gentleman and a 60-year-old woman become a mermaid," Rodriguez said.

The courses have also become a popular activity for private parties and hen nights with sessions held in your own pool.

The academy's students come from around the world, from the USA and Brazil to Turkey, France, Germany and the UK, all drawn by a shared desire to get back to nature and inhabit the skin of the mythical creatures.

The Sirens Mediterranean Academy also extols the health benefits of becoming a mermaid: "exercising in the water reduces stress and anxiety, increasing the mobility and vitality of our body," its website proudly states.

"It gives moral force and stimulates endorphins, brain substances known as the pleasure hormones, which also helps you to improve your physical appearance."

A great workout that makes you more beautiful? Who could possibly resist?

Adapted from The Local