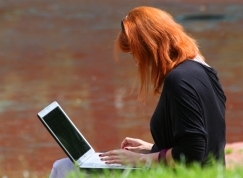 
Almost half Spanish workers check work emails when on holiday.

Fifty two per cent of these say they scan their inboxes, responding only to important messages. While 46 say they do so to reduce the volume of emails when they return to work, 25 per cent find it easier to relax by keeping tabs on the office and almost a quarter (23%) claim it’s because they love their jobs.

This was revealed in a new study by travel website TripAdvisor of almost 11,000 Europeans, including 750 Spaniards. The study reveals more than half German (61%), Italian (58%) and French (50%) holidaymakers go online to read workplace emails.

Along with the British, people in Spain ‘disconnect’ from work during their time off more than any other European nationality. But while checking office emails may be common for the Spanish, 82 per cent of respondents said they have never prepared a presentation or carried out other work duties while off.

Being forced to do work tasks while on vacation affects the Spanish more than any other European nationality, the survey found. While 57 per cent of Spaniards cannot enjoy their holidays if they have to work, only a third of the French and British feel the same way, and even fewer Germans (27%) or Italians (22%).

Despite their reluctance to work when off, a third (32%) of the Spanish think it is expected of them, more than any other nationality in the EU. Only 13 per cent of British respondents think their employers expect them to be available to work when off.