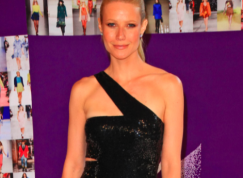 
There’s a reason Gwyneth Paltrow looks the way she does after having two kids and being 37. It’s because she works out two hours a day!

She works out, but she loves to eat as well. In the August issue of Vogue, she tells the writer that her favorite food is French fries. When you’re working out 2 hours a day, we’re assuming it’s ok to cheat on your diet. Paltrow spent a few days with the Vogue writer cooking for her and having her understand her new cookbook titled, My Father’s Daughter. Her new cookbook is set do be out in stores sometime in April 2011.

What’s the big advice Gwyneth gives? "Invest in what's real. Clean as you go. Drink while you cook. Make it fun. It doesn't have to be complicated. It will be what it will be."  Things reportedly went sour when the writer asked Gwyneth whether or not she had ever had plastic surgery. We’re assuming she got upset or offended at that question because she uninvited her to the cover shoot later.

Surgery or not, Gwynny looks great!

WOW! What a dress Gwyneth!

Gwyneth Paltrow Would Need Drugs to Perform At Oscars

Gwyneth Paltrow Would Need Drugs to Perform At Oscars