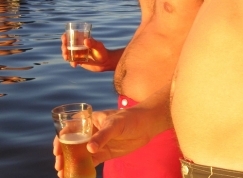 
The image of men and women with huge bellies belongs to the Anglo-Saxon culture, says a recent Spanish report

Raise a glass to Spanish scientists! According to a report published  by the College of Doctors in Asturias "the beer belly is a myth" since two or three glasses of beer a day, combined with a healthy Mediterranean diet , "doesn't make people fat" and actuallyreduces the risk of diabetes and high blood pressure.

The image of men and women with  huge bellies belongs, they say, to the Anglo-Saxon culture, which is characterised by the consumption of huge quantities of beer and a diet high in saturated fats, combined with little or no physical exercise.

Doctors Ramón Estruch, from the Hospital Clínic, and Rosa Lamuela, from the departament of nutrition at the University of Barcelona, maintain that the studies they have carried out show that the moderate consumption of beer does not produce any increase in body mass or the accumulation of fat around the waistline.

The study, which looked at 1,249 people over the age of 57 with an increased risk of cardiovascular disease because of their age, concluded that beer is actually healthy.  According to the authors of the report, people who stuck to a Mediterranean diet and drank between a quarter and half a litre of beer each day "not only didn't put on weight, but in some cases actually lost weight".

Beer is a fermented product that derives its nutritional goodness from the cereals from which it is made, abd just like wine gets its goodness from grapes, or cider from apples, explained Dr. Laumela.  It also provides more folic acid, vitamins, iron and calcium than other drinks, which produce a "protective" effect on the cardiovascular system.

The dietary model of Spanish beer drinkers is, according to the doctors involved in the study, "very different to the Anglo-Saxon model, where people drink huge quantities of beer... whilst eating chips and sausages".

We'll drink to that!