Celebs Reveal How to Get a Hot Beach Body 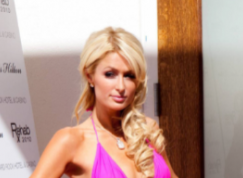 
With summer almost here, it’s time to get in shape and get that hot beach body you’ve always wanted.

Because celebrities are like superior versions of us common folks, who better than to get advice from?

Hollyscoop caught up with some stars for their tips on what they do to stay healthy and look their best in a bikini.

The dancer with the killer body, Julianne Hough says she stays in shape by “eating healthy, not being crazy, working out when I can.” Some less traditional advice? She stays fit by “just being happy, I think that is the biggest thing, just having a good attitude, being positive and happy.” If I had the body of a ballroom/latin/swing dancer goddess I would also be really happy.

The Real Housewife, Lisa VanderPump, isn’t super crazy about working out but still tries her best. “I don’t understand people who love working out. I get on that treadmill and just try, watch the news, talk on the phone, do anything really to distract myself and keep it going,” she tells us. Fake it till you make it!

Paris Hilton has some healthy tips and it consists of tan in a bottle. Put on a lot of sunscreen…it’s so much better to spray tan.” She also adds “Pilates is a really fun workout and makes your body look great.”

Singer Kelly Rowland says she follows a strict diet during the week except on Sundays she eats whatever she wants, “on Sunday I go nuts. Sundays are my go nuts day.”

The reality star Whitney Port tells Hollyscoop, “[I eat] everything in moderation, [eat] a lot of veggies and fruits and to snack constantly.”

Disney Star who recently slimmed down, Raven Symone jokingly tells us, “just stand outside cause it’s going to be super hot and when you sweat you lose weight.” If only it were that easy.

Jamiroquai in Malaga this summer (2)