Barbie vs. real women: the war rages on 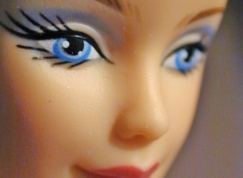 
We know that Barbie’s body is anatomically impossible. So why are we still trying for it? Every day a new plastic surgery promise emerges: scooped-out backs, rear-end lifts, sculpted kneecaps. If it’s possible, it’s suddenly necessary.

But what exactly would you have to go through to get the 'perfect' Barbie body? In the latest issue of O Magazine, model Katie Halchishick becomes the human diagram. Posing for photographer Matthew Rolston, her glamorous, Marilyn Monroe-type features are surgically outlined according to Barbie's proportions.

Here’s a breakdown of what she'd need done to be the kind of doll women aspire to: a brow lift, a jaw line shave, rhinoplasty, a cheek and neck reduction, a chin implant, scooped-out shoulders, a breast lift, liposuction on her arms, and tummy tuck, which would also have to be sculpted as if it were lined in whale-bone from the inside. And that’s just the half of her. Halchishick doesn’t actually need or want any of these procedures. She’s proving a point: just because our distorted image of how a body should be is medically attainable, that doesn’t mean it should be attained.

And if you doubt that anyone actually wants to look like Barbie, meet Cindy Jackson, a 55-year-old woman who’s had 52 cosmetic surgeries to look like her plastic idol."This is the way I should look,” Jackson told Good Morning America. "It's evolution. It's medical progress."  There's also 10-in-one-day record-holder Heidi Montag, and a revolving door of on-screen personalities who look more like each other and less like human beings by the day.

Not everyone would call that progress. “The number one wish for all teenage girls is to be thinner,” said Halchishick, a former Ford Model who now mentors high school students about body image issues. “They think what makes a girl beautiful is skinny with big boobs, perfect hair, perfect make-up.”

Last year a total of 13.1 million body parts were surgically altered. Five percent of patients were under the age of 20.

Halchishick, who co-founded the website Healthy is the New Skinny, doesn’t place all the blame on surgery or a pint-sized rubber and plastic doll. She believes change has to start in schools, as well as in the fashion industry. “Girls want to know how to lose weight so badly, and the schools don’t want to talk about it, because they’re worried they’ll develop a complex,” she told The Gloss in March. “There need to be models to show [girls] to wish for more.”  She now heads up her own modeling agency for women with natural figures. She’s also campaigned to get plus-sized designers into New York Fashion Week. But her spread in O magazine, the first nude pictorial they’ve ever featured, has been the most buzz-worthy.

Accompanied by an essay by writer Amy Bloom, the photograph is intended to make women rethink their body image ideals. But it hasn't had that effect on everyone. When one 15-year-old girl saw this photo of Halchishick, her first thought was of her own imperfection, according to a blogger for Healthy is the New Skinny.  “I thought if a girl as pretty as that has to change so much to be perfect, it made me wonder how much more I’d have to change.”