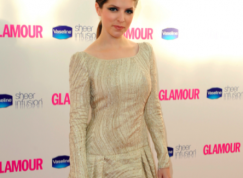 
Anna Kendrick has revealed her tips at staying in shape.

The 'Twilight' star - who plays Jessica Stanly in the vampire movie franchise - says her stunning figure is down to exercise and yoga classes.

She said: "Sometimes I just run or use the elliptical. I do yoga when I'm feeling good. I take a nice, long yoga class." Despite her enthusiasm for exercise, the 24-year-old actress admits she finds it difficult to resist temptation and watch what she eats. I kind of eat anything, so I guess I have to work on that. But all in moderation. When I was in the UK, I had scones with clotted cream, which is like pure fat, but a lot of fat is delicious, so I couldn't help myself."

Although Anna has a great body, she struggled to find the perfect dress for the Oscars when she was nominated for Best Supporting Actress for her role in 'Up In The Air' back in March this year. She is quoted by website hollywoodlife.com as saying: "It's been physically more uncomfortable than I expected it to be. You want your waistline to be just so, and I'm always trying to look taller than I am - so I'm always in something that's a little snug or a little too tall."