The human hourglass: The Romanian model who has just a 50cm waist 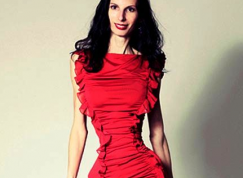 
A model with a waist of just 50 centimetres insisted that she eats three proper meals a day, including fatty foods such as ships, pizzas and even kebas!

Romanian Ioana Spangenberg(30 years) is 186cm tall and weigs only 38 kg! The model told The Sun: "No one seems to believe it, but every day i eat three big meals and I snack on chocolate and crisps all the time. I just have a small stomach. It's a bit like a gastric band, if I eat too much I feel sick".

Mrs Spangenberg was born with a very normal weight and as a teenager her body started to transform! At the age of 13 she would get friends to put their hands completely around her 38cm waist. She says she has tried to fatten up, eating sweets like Mars chocolate bars to do so, but to no avail. "In Romania it is better to be overweight, because that means you are from a wealthy family."

And at the year of 2006 after meeting her German husband Jan, she says she finally became comfortable in her own skin. The husband encouraged her to become a model after some positive feedback of the photographs he posted of her online. "I would still like to gain weight so I don't look so shocking. And now that I live in Germany I can't get enough pizza or kebabs."

Ralph Laurens´ anorexic-retouched model was fired for being fat (1)