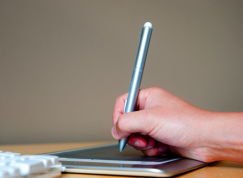 
While your co-workers start every day enjoying a cup of coffee together in the break room, you're barely able to find time to call your doctor. While they're taking lunches, you're rushing through another meal at your desk. Sound familiar? Here's the good news: This apparent discrepancy may not mean you've got a bigger workload or that you're a harder worker. Instead, it may mean that they've mastered certain time-saving skills and habits that you haven't-until now. From prioritizing your workload to learning which projects don't need to be perfect, read on to discover eight workplace habits that'll boost your productivity and lower your stress levels

1. They make it a point to take breaks.

Americans seem to think that constantly working is synonymous with being productive, but unless your brain is functioning at its maximum level, you may not be getting as much work done as you think. "[Taking breaks] is like hitting the reset button. It helps you empty out your 'brain cache' so you have room to refill it," says Christine Hohlbaum, author of The Power of Slow: 101 Ways to Save Time in Our 24/7 World. First and foremost, she recommends taking lunch every day-and leaving your desk to do it. "When you have a 'working lunch,' it's just not very efficient. At some point you're going to lose attention," she says. Ultimately, eating while you work will cause you to suffer on two fronts: you won't be able to pay attention to your food-a surefire way to overeat-and you won't be giving your work the proper attention it deserves. In addition to a "real" lunch break, Hohlbaum suggests allotting time for other breaks as well. She recommends taking five minutes in the morning, before starting work, and at least a 10- to 15-minute break in the afternoon. Whether you take a short walk, read a book or stare out of the window with a cup of tea, it'll help you recharge and improve your overall productivity. "It's really important to take time off because otherwise your brain will reach a saturation point," Hohlbaum says, explaining that when this happens, it becomes hard to focus on even the simplest task. "At that point, you need to push away from your computer and take a break."

2. They start their day off on the right foot.
According to a recent study at the Fisher College of Business at Ohio State University, if an employee is in a bad mood when they arrive at work-whether because of familial problems or a stressful commute-it can decrease their productivity by as much as 10% that day. So unless you come in to the office every day in a great mood (and who does?), start your day with 5 to 10 minutes of time dedicated to decompressing. "Create a ritual. Maybe it's meeting in the coffee break room or going around the office to greet everyone. It doesn't matter what you do, as long as you foster a sense of connection [with your coworkers]," Says Holhbaum. "Swinging by to say 'hi' to your colleagues when you walk in gives you a sense of focus. When you feel you're part of a bigger effort, you feel more connected to why you're there and that can make all the difference in the world." Re-focusing your mind at the beginning of the day will also create a sense of calm, helping you to disregard outside stressors and zero in on your daily tasks. "If we're actually able to start the day centered, then we'll have a longer tolerance period before we get off track," Holhbaum says.

3. They make mindful food choices.
You are what you eat, and eating a heavy mid-day meal will often make you feel lethargic for the rest of the afternoon. "Consider what you're eating at lunch. If you're having that post-pasta slump at 2 p.m., and need java or cookies to pep back up, maybe you should try a salad or something a bit lighter so you won't lag," suggests Hohlbaum. The key is keeping your blood sugar levels steady throughout the day, according to Kari Kooi, RD, corporate wellness dietician at The Methodist Hospital in Houston, who recommends three light meals and two snacks at regular intervals. "Heavy meals can make you feel sluggish because they require more energy to digest," Kooi says. "[A quality lunch] will consist of a fiber-rich carbohydrate, like water-rich veggies, and a lean protein, like chicken or fish," she says. And what does Kooi suggest you avoid? "A highly processed meal, like some of the frozen meals in the grocery store, will not give you the sustainable energy you need. The less processed the better when it comes to keeping your energy levels up." When you hit that midday slump, Kooi suggests going for proteins like mixed nuts and fruit instead of the usual energy-zapping pretzels, cookies or candy, which cause your blood sugar levels to spike and then drop and may even make you hungrier, according to Kooi.

4. They keep a flexible to-do list.
Making a daily list of to-dos is a great way to stay on top of your work. However, there is one pitfall-it can make you inflexible. "A lot of people feel their day's been wrecked if they have to change their plan, but the most effective people understand that's part of the job," says Vicki Milazzo, author of Wicked Success Is Inside Every Woman. "I always start my day with a plan, but by 9 a.m. I've busted that plan." However, according to Paula Rizzo, a master list-maker and founder of ListProducer.com, it's important to keep some form of a to-do list, no matter how much your day changes. For example, Rizzo begins her days with a master list, which she continually updates throughout the course of the day to note the items that haven't been done or to add tasks as they crop up. Before leaving work, Rizzo will make a fresh list for the next day. The key, she says, is referencing the changing list throughout the day to keep herself on course. "Just putting a little extra work into it will keep you on track."

5. They use technology with intent.
In today's 24/7 all-access world, it's hard to get a handle on technology use. While it's impossible to avoid it altogether, you can be disciplined about how much time you spend perusing the Web. Set aside a specific time, say 15 minutes after lunch, to scroll through your social networking sites or other favorite websites-and stick to it. Or try something like Google Chrome's website blocker, which allows you to set restrictions to your online time by either totally blocking your favorite websites or just restricting the timeframes within which you are allowed to check them. In addition to surfing the Internet, it's important to watch your email habits. Whether you give yourself 15 to 30 minutes at a set time each day to check your personal email, or you allow yourself brief intervals between tasks, Holhbaum says the key is to be very mindful of the time you're spending checking your non-work inbox. "Have a very clear distinction between what's personal and what's work. If that's a part of your 'OK I need to zone out for a little bit' time, that's fine. But you need to be clear and be mindful of what you're doing." Even work-related emails can become a distraction if not properly managed. Ask yourself if email is the best method of communication, or if you're better off calling the person. "Sending 100 emails isn't [always] going to be the most productive thing. And as we know, emails beget emails. They're like little rabbits," Hohlbaum jokes. "If it's a one-way communication, for example forwarding an airplane itinerary, you don't need to have any answer [so email works]. But if you want detail or you know the person won't respond right away by email, pick up the phone," she says.

6. They balance their workload.
Different tasks require different levels of concentration, which you can use to your advantage. Start by identifying-and placing-the tasks you have into two categories: weeds and intensive work. Weeds are small, manageable things such as handling email, phone calls and minor organizational tasks. Intensive work is anything that requires an extended period of concentration, such as management tasks, preparing presentations, writing or editing. "Miscellaneous routine tasks are like weeds in your garden; we all have them, and no matter how often we try to get rid of them, they never go away," says Milazzo. "Yet they do have to be handled, and pulling a few weeds can provide a restorative break from more intensive work." Milazzo recommends splitting up long sessions of intensive work with regular 15- to 30-minute intervals of weed pulling. This way, you'll accomplish a variety of tasks while not burning out on one type of work.

7. They put perfectionism in its place.
While turning in perfect work has been encouraged since kindergarten, that attitude can be counterproductive if it's not managed. It's important to pick your battles. "Women, by nature, are somewhat perfectionist," says Milazzo. "So we need to distinguish what requires perfectionism," she says. Of course you want to put your best foot forward in all situations, but if you're strapped for time, prioritize. If, for example, you're writing an informal memo or email to a co-worker, give it a quick look and spell-check it, but resist the urge to re-read it three times over. If, on the other hand, you're creating a brochure for your company or preparing an important presentation, then that's the time to put all of your perfectionist tendencies to good use.

8. They know how to say "no."
It's easy to get distracted or overwhelmed at work. But one of the secrets of highly productive people is that they learn when and how to say "no." For starters, say "no" to whiners, complainers and distracting people. One way to do that, according to Rizzo, is by wearing headphones. "That sends the message that you're busy and it drowns out the noise as well," she says. When it comes time to say "no" to the boss, tread lightly but firmly. You don't have to spell out n-o per se; rather, ask her to prioritize what's most important given what's on your plate. "When an employee does that, the boss usually comes to their senses and they get it," Milazzo says. "You don't want to make your boss the enemy; you want your boss to know you're there for the company, and that you're there for them. If they know that, they're more likely to listen to what you say."

Tag people on photos without registration! (1)

Top 10 Richest People in the World and their Secrets! (1)

Sandra Bullock is Ready to Go Back to Work