7 in every 10 Spaniards say they are tired 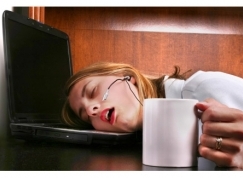 They would like an extra hour in the day to spend on leisure.

Seven out of every ten Spaniards are tired, a new survey has shown, and would like an extra hour in the day to spend on leisure. More than half said they would spend that extra hour on physical exercise, but 39% said exercise would be the first activity to go when they are tired.

The survey, by Pfizer-Espana, questioned women and men between the ages of 25 and 65, and found that the main cause of accumulated tiredness and a lack of energy was the stress of work. While more women than men said they feel ‘very tired’, it is also women who say they have more energy in being able to combine work with their home life.

Eighty percent of the men who were questioned said they would love to be able to find a balance between work, leisure and exercise.

In the opinions of those who took part in the survey, the Austrians have managed to find the best balance between their work and their family life. Europa Press notes that the Spanish come second from the bottom, while the Portuguese find combining the two the most difficult.