Karina Miller BLOG 20: The paradise in the Maldives
Golf 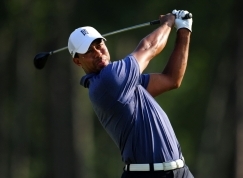 
His golf career might be in a seemingly downward spiral, but Tiger Woods is still the world's most valuable sportsman according to a top business magazine.

The American, who this week dropped out of the world's top 50 golfers for the first time in 15 years, has retained his position as Forbes' top individual sports brand. The 36-year-old has, according to Forbes' calculations, lost $17 million from his brand worth in the past year. But his $55 million value is still $29 million higher than the second-placed athlete, tennis star Roger Federer.

Despite the scandal that broke in late 2009 about the marital infidelities that led to his divorce from wife Elin Nordegren, Woods has begun to restore his portfolio of endorsements with June's agreement with Japan's Kowa Company, which deals in medical equipment and pharmaceuticals. Fellow golfer Phil Mickelson is ranked third with $24 million, while basketball star LeBron James is catching fast with $20 million. The Miami Heat player earned half that total from his deal with Nike -- again Forbes' most valuable overall brand, up 40% to $15 billion after spreading its swoosh into even more world markets.

English football club Manchester United lost top spot in the team brands to baseball's New York Yankees. While United suffered due to the British pound weakening against the dollar, with a worth of $269 million, the Yankees' value -- now $340 million -- has boomed 57% since 2007 according to Forbes' Mike Ozanian.

"Had the exchange rate held fast since 2007 the Red Devils, who are looking to capitalize on their global fan base with an IPO (public share offering), would still be the most valuable team brand," Ozanian said. The NFL's showpiece Super Bowl, with a brand value of $425 million, stayed well clear of the Summer Olympics ($230 million) and the FIFA World Cup ($147 million).