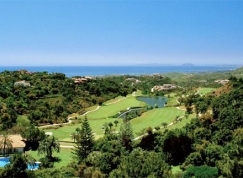 The cost barrier to join a Russian club for most means that it is less expensive to book through a tour operator and travel to abroad to play. The challenge for Spain is to get the message through to Moscow that Spain and specifically the Costa del Golf, should be the destination of choice for the travelling Russian golfer.

In October and  November, Del Sol Packaged (DSP) will be hosting two Golf tournaments specifically aimed at the Russian Golf Tourism market. Timed to coincide with the end of the Russian golf season, both tournaments are being actively promoted through the Russian Golf Clubs and recent collaboration with the Spanish Embassy’s Tourism Department in Moscow has already given a significant boost to the awareness of both competitions throughout Moscow and St Petersburg.

The November tournament to be held at La Zagaleta, is the “Golf Style Cup 2010” and fourteen invited guests have already confirmed their attendance to this exclusive tournament, open to sponsors only. The guests include the Managing Director of “Golf Style” Magazine as well as senior businessmen from sectors including the Moscow Golf Federation, Oil & Gas, Real Estate & Public Sector utilities.

DSP’s collaboration with the Spanish Embassy’s Tourism Department has increased the level of interest from this very affluent group of Russian golf enthusiasts. At a recent competition in Moscow in association with the Spanish Tourism department, the winner of the competition was presented with free entry including accommodation to the October tournament, the “DSP Marbella Cup 2010”, which will take place over 2 days at San Roque old and new courses on October  29 and 30.

Marina Robertson, Managing Director of DSP said “We are very proud to be hosting so many prominent Russian Businessmen and golfers here on the Costa del Sol. This visit marks the start of a new market opportunity for the region as I am sure Russian golf enthusiasts will be very impressed with the standards here”.