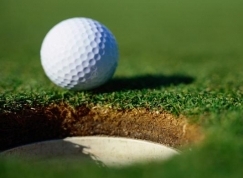 Spain is a desirable destination to  Russian golfers

The Spanish companies show of strength at the Golf and Luxury Property Show held in Moscow was a clear sign that the Russian community as part of the local economy is becoming increasingly important to the Costa del Sol. Despite the chaos in Europe caused by the Icelandic volcano, more than 10 Spanish companies were represented amongst the 90 exhibitors all focused on the Golf and Real Estate sectors, both very important industries for the coast and Andalucia.

The number of Russian registered residents in Spain now tops over 190,000, with some 30,000 in Andalucia and it is a community that is set to continue to grow. The Russian Federation has a tiger economy and wealthy young Russian families have started to look to Europe as a place to settle and bring up their children. Schools, Colleges and the Real Estate companies have all seen a surge in enquires and registration from the growing numbers within Russian speaking community looking at Spain as the place to settle.

The Golf and Luxury Property Show is Moscow’s leading trade show within these sectors, although this is the first year in which the organizers in Russia have merged the previously separate shows. “The synergy for Real Estate and Golf Tourism makes it ideal for a number of Spanish businesses” said the organiser and Moscow based ExPat Kim Waddoup “We are very pleased that so many Spanish businesses see the opportunity in the Russian market and want to promote Spain as a destination market for the Russian community”.  Marina Robertson, a Russian National and Director of Del Sol Packaged, braved the ash cloud to attend the show for the first time. Marina said “ The opportunity to meet the Golf Associations, Golf tour operators, Real Estate promoters and to feel the positive attitudes towards Spain has been very encouraging. There are so many opportunities to promote the Costa del Sol to the growing golfing community here. Golf tourism in Spain and the Real Estate sectors will undoubtedly benefit from attending this years show”

There is no doubt that the Russians are catching the golf bug. There are brand new courses being built and according to some data, the number of players is expected to grow from 5,000 to 25,000 over the next few years. Whilst it still may be a niche market, the number of courses being built in Moscow and St Petersburg and the number of players joining the Russian golfing federation every year speak for themselves.  The cost barrier to join a Russian club for most means that it is less expensive to book through a tour operator and travel to abroad to play. Due to the lack of promotion of Spain in Russia until now, the destination of choice is Belek in Turkey. However, it is the view of many that Spain is of much higher quality and is much more desirable as a destination to most Russian golfers.