Solheim Cup heading to the coast? 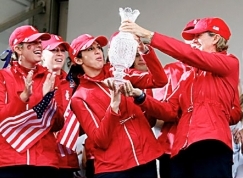 The US ladies team currently hold the cup

Nine parties have expressed their desire to host The 2015 Solheim Cup when the event takes place in Europe.

Six of the candidates have publicly announced their intentions to host the biannual transatlantic women’s match play tournament.

Additionally, there is a bid by Costa Del Sol in Spain, which would allow the Ladies European Tour to select the most suitable venue in the region, as well as three other bids by interested parties who wish at this stage to remain anonymous.

The bid deadline was 29th October with the result expected in 2011. Previous European home matches have been played in Scotland (Dalmahoy & Loch Lomond), Wales (St. Pierre) and Sweden (Barseback & Halmstad). Killeen Castle located near Dublin, Ireland, plays host next September 23rd – 25th where record crowds are expected to support the European Team as they try to replicate the magnificent victory of the European Ryder Cup Team at Celtic Manor and bring the cup back to Europe. In 2013 the United States venue is Colorado Golf Club, near Denver.

“Obviously the Ladies European Tour is thoroughly delighted with the level of interest that these parties have expressed in The 2015 Solheim Cup, showing the strength and stature of the tournament and popularity of women’s golf,” said Mark Casey Director of Operations and The Solheim Cup for the Ladies European Tour. “In 2006 we received bids from seven nations for the 2011 Matches, so this is a step forward re-emphasising the development of the event and ladies professional golf throughout Europe.”

The Ladies European Tour is now reviewing the submissions and will outline a timescale for decision making in the coming month following an LET Board Meeting in December.