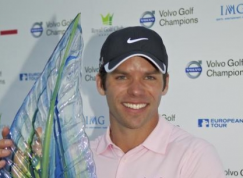 The final field boasts all four current Major Champions, six of the leading seven players in the world and it will be the first time all three of the World’s top ranked players have competed in Spain. There are 14 nationalities represented and likely to be in excess of 50 OWGR points on offer to the winner in what is the strongest World Match Play Championship field to date.

Louis Oosthuizen, 2010 Open Champion, was awarded the sponsors invitation and he completes the quartet of current Major champions in the draw - Graeme McDowell, Martin Kaymer and Charl Schwartzel. He commented, “I am very grateful to Volvo for offering me this invitation – with such an elite field I know there were any number of great candidates who were hoping they would get the call up. I hope I can make the most of the opportunity and am really looking forward to playing in this historic tournament that I watched Ernie Els win so many times.”

Australian Aaron Baddeley, a three-time winner on the US PGA Tour, said, “This is a great opportunity for me to play against so many of the world’s best players. I am currently just outside the World’s top 50 so a good finish in a tournament with such high world ranking points would be great! It looks like there will be some great matches and I am excited to see who I will be grouped with.”

The youngest of the 24 players will be Korea’s Seung-yul Noh who won the 2010 Malaysian Open at only 18 years of age. He enthused, “I am very excited to play in the prestigious Volvo World Match Play Championship in Spain. I am already wondering whose bracket I will be in as there are so many top p layers I would love to be drawn against. There are too many to mention them all but, for example, I think I would learn a lot from playing an experienced player like Miguel Ángel and I would have a really fun match with Rory.”

Per Ericsson, President of Volvo Event Management - Golf, added, “We are delighted with the quality of our final field. We developed the qualification criteria with the ambition to gather a truly world class international field and with all the current Major winners, six of the World’s top seven ranked players and 14 nationalities represented we feel we have achieved just that. Now we are looking forward to seeing how these tantalising match ups play out over the beautiful Finca Cortesín course next week.”