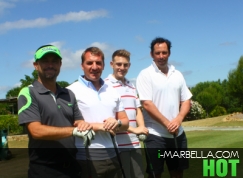 The event was arranged to raise money for Make a Wish Spain and more specifically Lidia, a sweet young girl, who was diagnosed with cancer a few years ago. Make s Wish Spain aims to fulfill the wishes of sick children, alleviating them for a short time from the continuous hospital treatments, doctor ́s appointments and constant reminder of their illness. Lidia is only 14 years old but has been fighting for so long that she has forgotten the joys in life. Her dream is to spend a few memorable days at Disneyland with her family and create a memory she can cherish forever.

A raffle with prizes donated by Sala Group’s suppliers and an auction featuring signed shirts by Allan McGregor, Stephen Carr and Steven Davis, along with a series of kind donations contributed by locals including sponsor Lexland Abogados raised enough money to pay for flights, accommodation, food, transport and insurance to send Lidia on the trip of a lifetime.

If you would like to make a donation to Make a Wish Spain please visit www.makeawishspain.org