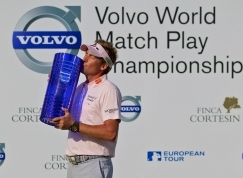 
The Englishman won one of the richest prizes in Golf

Ian Poulter has emerged as the winner of the Volvo World Match Play Championship.

In the final, the first of his six matches in four days which did not go to the 18th green or beyond, he beat his fellow Englishman Luke Donald 2 & 1 to take the Euro 800,000, one of the richest prizes on the European Tour. In doing so Poulter became the first golfer in history to have won both the Volvo and Accenture match play titles and enhanced his already strong reputation as a formidable opponent in the sport’s head-to-head format.

Poulter’s victory was not without a mishap. At the eighth hole he fell badly onto a cart path attempting to play a shot from scrubland, but that was forgotten as he savoured winning the biggest title of his career on the seventh birthday of his son – named, like his opponent, Luke.

“It has been pretty special to win here,” said Poulter. “I looked at the names of the previous winners on the first tee and on Luke’s birthday I thought it would be special to put my name on it as well.

“The key to my victory was finally starting to hole putts after a frustrating last few months. And it is a nice boost because there have been a lot of questions asked about the way I have been playing this year.”