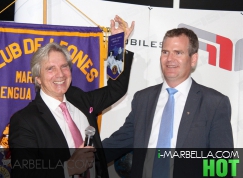 The prestigious car house Fimmo Car Gallery is donating a Mercedes Smart For Two worth 13,000 EUR for the Lions Golf Championship in Marbella in March 2015. The car was officially given to the Lions Club Marbella lengua Alemana by its owner, Mr Walter Fischer, in his exclusive showroom in San Pedro last Thursday. The evening was accompanied by live music, drinks, cocktails, and exquisite catering prepared and served by the restaurant Sol y Luna in Marbella.

The president of the Lions, Tobias Heyden, thanked Mr Fischer for this extremely generous donation, as well as all the sponsors who attended.

Former director of the worldwide organisation Lions International, PID Luis Dominguez Calderon, was also present together with the President of The Lions Club Mijas.

In his acceptance speech, he announced that The Lions International Organisation of the United States supported The Lions Golf World Cup. All 1,500,000 Lions members were updated making Walter Fischer and Fimmo Car Gallery and all the other sponsors known throughout the Lions world across the globe. Words of gratitude also went to the main sponsor, Hyla, Hambros Societe Generale, Grew Travel Agency with a sponsored First Class Trip to Mauricius worth 10,000 EUR, Villa Padierna Golf Resort, the communities of Benahavis and Estepona, the tourism board of Andalucia, Costa del Sol Patricionato de Turismo, Alejandro Hermann, Mara Collection Ralph Brenk, Yamaia, Marina Marbella, Domosat, Nueva Cascata, Topo Group, and many smaller sponsors that made donations ranging in value from 500 to 1,500 EUR.

150 golfers have already registered for the tournament, but there are still a few places left for those who want to be part of this great event at Villa Padierna Golf Resort at the end of March 2015!