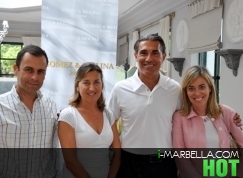 This tournament, which celebrated its fourth consecutive year of charity work accommodated a large number of participants enrolled under the "Medal Play" with male and female single players with limited handicap 18-24.

For the thirteenth consecutive year, Gomez & Molina Jewelers mustered numerous amateur players from many different places to participate in a tournament that already holds a prominent position in the industry. Without doubt, this competition is valued not only for the environment in which it is held, but for the high standards and quality of the trophies, with which jewelers award the winners.

The president of the foundation, the basketball coach Sergio Scariolo, besides participating in the tournament, was one of those in charge of handing out the numerous raffle prizes and gifts donated by different companies who wanted to show their support of the Foundation. Some of them are Amar Clinic, Marbella Casino, Darcis, Golf Us, Golfino Shop; Gross Dentist, Holiday Golf, Shapó Olé, Tannin Restaurant and Wine Warehouse, among others.

Thanks to their contribution a total of 280 € was raised for the institution. La Quinta Golf also helped the cause by donating to the charity a percentage of entries.

Funds raised throughout this event will go entirely to the Social Work performed by The Cesare Scariolo Foundation in Maternal and Child Hospital Carlos Haya in Malaga which is trying to alleviate, as much as possible, the physical, psychological and economic struggles of children and their families affected by cancer.