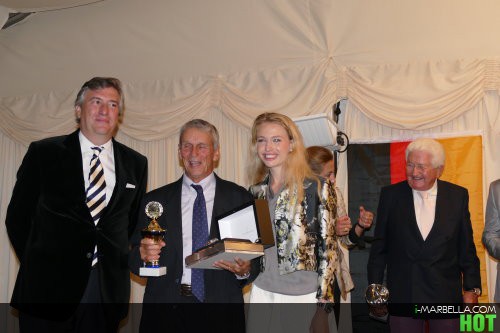 The Lions Golf World Cup 2016 is a Team Game where 2 players join forces to play for the big trophies. 32 teams (64 players) played, coming from 20 different countries as far as Mexico, America, and even South Africa. The European players could play at the same time as both tournaments had the playing format stableford points.

The champions of the tournaments could enjoy outstanding prizes like the donated Smart Car by Fischer Car Gallery & Von Poll Real Estate.

Christiaan Reijnders won the car, but gave it back immediately for the charity fund. He enjoyed with all the three Category Champions a wonderful watch donated by the generous Bucherer company. The guest of honour Mr Jörg Bucherer was present during the farewell gala to be part of the outstanding Bucherer Team.

Sponsors like Casino Admiral, Abbeygate Insurance, Da Bruno, Mara Creations, Artists: Christa Spänhoff & Klaudia Ilg, Kempinski Hotel Bahia, Elba Estepona Hotel, Precise Resort Rompido, Marbella Club, and, last but not least, Almenara Golf Resort made it possible that the good proceeds of the tournament will contribute to the worldwide measles fund. As a joint effort, the Bill & Belinda Gates Foundation and Lions Club International contribute millions to have this terrible disease eradicated from this planet, of which each day more than 400 children need to die.

All golf participants and excursion partners liked the event and shows a lot put together by the Lions Golf Organisation Team (Dr. Volker Bernhardt, Angelika Eisinger, Luis Dominguez Calderon). They will definitely come back for the next Lions Golf tournament.

A BIG THANK YOU TO ALL SPONSORS for the great support and outstanding prizes!