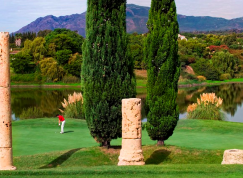 It is official! The crème de la crème of the Russian golf world get together to bring Golf Style Tournament to Costa del Sol for the fourth time in 2 consecutive years.

3 May 2012, San Roque New, will see the finals of the IV Golf Style tournament between Russia and Spain. Russian team will be lead by the winner of the qualifying tournament for the European championship in Russia in 2011, Victor Ostankov. Will Spanish team be able to maintain their title of winners for the 4th time? To be seen…

During the one-week training for the Russian team preceding the finals, the new President of Moscow Golf Development Federation and the Mayoress of Marbella, Angeles Munoz, will sign a collaboration agreement on 30th April to further develop a mutually beneficial relationship between the two cities.

The main sponsor of the IV Golf Style Tournament is Ascari Race Resort, bringing even more speed, fun and action to what has already became a very exciting event for the Costa del Sol.